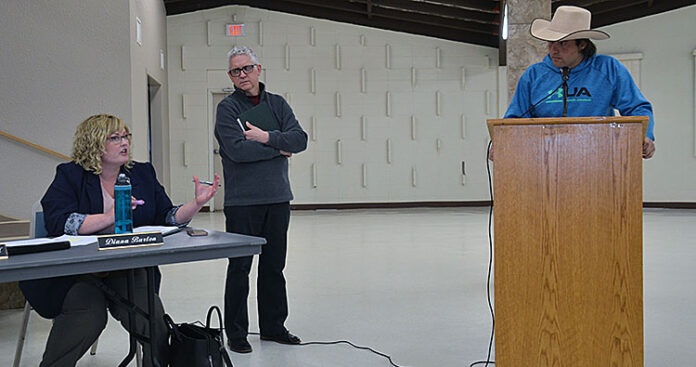 Cooperation is the key to success.

That’s the conclusion reached by the close to 100 Meadow Lake and area residents who attended a public open house Tuesday night (April 17) at the Meadow Lake Civic Centre. The purpose of the event was to discuss the future of the Meadow Lake Stampede Grounds and the accompanying grandstand, the latter of which is currently closed to the public for safety reasons.

“The backbone of our whole town has always been hockey, chuckwagons and rodeo, and that’s something we should be proud of,” remarked Meadow Lake area resident and professional chuckwagon driver Dustin Gorst when addressing those in attendance. “However, any strong community or strong group that hosts rodeos, chuckwagon races, concerts or things of that nature doesn’t leave it up to the town to do it. I don’t know why Meadow Lake is at the point where we expect the town to do it all and have them rent (the space) to us. That’s not how it happens in other places. Normally, it’s a group of people that do it, and they’re not expected to rent the space – it’s their baby. We can’t look at them (city) and expect them to raise the money needed to fix the grandstand. We can ask them for help, but – within this room – a group has to be formed and it should be today to start fundraising for this.”

Last year, city council decided to close public access to the grandstand after numerous issues were identified as the result of a biannual engineering assessment. Preliminary budget figures for 2018 put repair costs in the range of $185,000, an amount the city was not prepared to cover at the time. Therefore, the Meadow Lake Lions Club will not be bringing Canadian Professional Chuckwagon Association (CPCA) races to town this summer and public feedback was sought to determine what steps to take next. Tuesday’s open house followed a recent online survey, the majority of respondents to which indicated they would like to see the Stampede Grounds remain in their current location and would support tax dollars being used to complete the necessary repairs.

According to city manager Diana Burton, however, relying on tax dollars could be difficult considering the estimated cost of replacing the grandstand with aluminum seating ranges from $678,500 to $1.5 million depending on the number of seats. To rent temporary stands would cost roughly $40,000 per event, while – in either scenario – several thousand more dollars would be required to complete other upgrades to the grounds and existing concession building. This also includes fence repair and track maintenance, all of which would add up to a significant tax increase or an additional levy that would still need to be funded by local taxpayers. That’s another reason why Gorst believes it’s time for the public to step up and take ownership of the grounds if it truly means so much. He also suggested a unique fundraising idea.

“I race for the World Professional Chuckwagon Association (WPCA) and we would like to help,” he said. “If somebody would host us and if the town is willing to move the portable stands (currently located in Lions Park), we could have a race featuring drivers from the WPCA.”

Gorst also said the WPCA would take part in such an event for free because of the cause it would be supporting.

“We’d also work in conjunction with the local pony association and bring five heats of WPCA action and three heats of ponies to Meadow Lake,” he said. “Just let us find sponsors first and we can possibly raise thousands of dollars.”

Meanwhile, others in attendance also addressed members of council and city staff by sharing their thoughts on how to save the grounds without it necessarily costing as much as anticipated. Some of the suggestions brought forward included seeking sponsorship to help offset costs, asking for donations from local contractors and businesses, rebuilding the grandstand to include a roof, purchasing additional portable stands, building a dirt hill where the grandstand is currently located and allow it to serve as a natural amphitheatre, planning a community work bee to allow residents with a vested interest in the grounds to perform some of the labour, as well as embracing the principles of Ubuntu contributionism, a concept that began in South Africa that provides tax breaks to people who contribute volunteer labour to certain projects. However, no formal decisions were made during the open house.

“You’re on the right track right now, encouraging people to sign up and to have some steering committees formed,” remarked councillor Curtis Paylor.

Paylor went on to note the Stampeders’ dressing room at the local arena, Assman Field in Lions Park and the tennis court beside Jonas Samson Junior High were all made possible by the efforts of dedicated community members.

“I know you can get the power of people behind things,” he added. “Really get behind it and go for it if this is what you want to see. There is no other intention for those grounds. We would love to see the tradition continue in Meadow Lake, but as long as I sit on council I will not put anyone in those stands. If that grandstand were ever to collapse, it would be a very difficult thing for any of us to live with. It would be catastrophic.”

Following the open house, a number of residents decided to take Gorst’s advice and put their names forward to form a Stampede Grounds committee. That group is scheduled to meet tonight (April 19) at the Lions Den at 7 p.m.