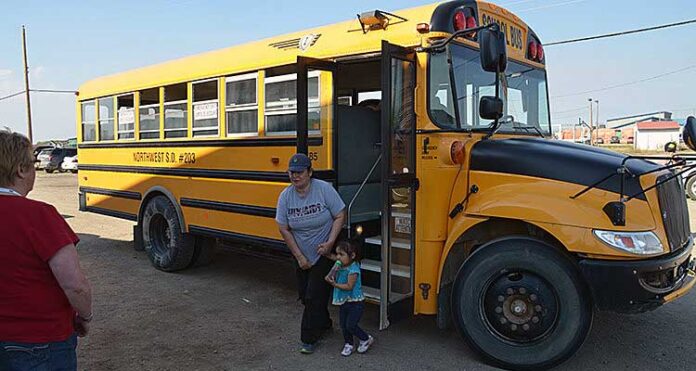 The people of Waterhen Lake First Nation are on the move.

The Ministry of Environment ordered a community-wide evacuation Tuesday afternoon (May 15) amidst two raging wildfires that ignited west of the community this past weekend.

“We are evacuating the entire community,” Waterhen Lake First Nation chief Joanne Roy said when contacted earlier this week. “We’re getting the people out as we speak.”

The day before the larger evacuation, a state of emergency was declared in Waterhen that saw elders and chronically ill community members transported to Meadow Lake. Tuesday’s broader evacuation, however, saw close to 900 community members transported to the Flying Dust First Nation gym and, from there, on to Saskatoon. About 50 others remained at Waterhen to assist police with security and other tasks.

“The chronically ill and the elders were removed from the community because of the amount of smoke and a lack of air quality – it’s been really bad,” Roy explained. “They will be remaining at two of the local hotels in Meadow Lake, while those with more severe breathing issues have already been sent on to North Battleford.”

Prior to announcing the community-wide evacuation, Roy said Waterhen was awaiting the arrival of an emergency management team from Prince Albert. Upon arrival, it was that team’s responsibility to assess the air quality which, in turn, determined the need for everybody to leave.

“This is just a precautionary measure at this time,” Roy added.

Meanwhile, the Red Cross was also on site in Meadow Lake and Flying Dust to assist the evacuees as they arrived.

“The Canadian Red Cross, on behalf of the Government of Saskatchewan, is providing emergency assistance to a small number of individuals and families from Waterhen Lake First Nation who are impacted by a wildfire due to having higher medical needs,” stated Leya Moore, a media relations consultant with the Ministry of Social Services. “Social Services contracts with Canadian Red Cross to provide emergency support to ensure individuals have access to basic necessities such as food, shelter, clothing, counselling and emergency transportation.”

As for the actual wildfires – referred to collectively as the Tuff fire by the Ministry of Environment – provincial officials say its status is changing all the time. As of this week’s news deadline, the fires had grown in size to 2,600 hectares-plus and were still not contained by Wildfire Management.

“Very gusty winds experienced yesterday (Tuesday, May 15) made it very challenging for our lines in all directions,” stated Scott Wasylenchuk, the ministry’s director of wildfire operations. “However, there have been no structural losses reported as a result of the Tuff fire.”

The initial blaze began Sunday west of Waterhen Lake, while the second one is located to the north. The ministry believes the fires to have originated by human cause.

“There was no sign of lightning in the area at the time the fires started,” noted a ministry spokesperson who asked not to be identified. “We’re not suggesting it’s the result of malicious behaviour, but sometimes things happen.”

Reports also indicate cabin owners at nearby Jeannette Lake and Flotten Lake north of Waterhen, as well as anyone at the Waterhen subdivision (located in the RM of Meadow Lake), Tawaw Cabins and M&N Resort have also been asked to depart the area.