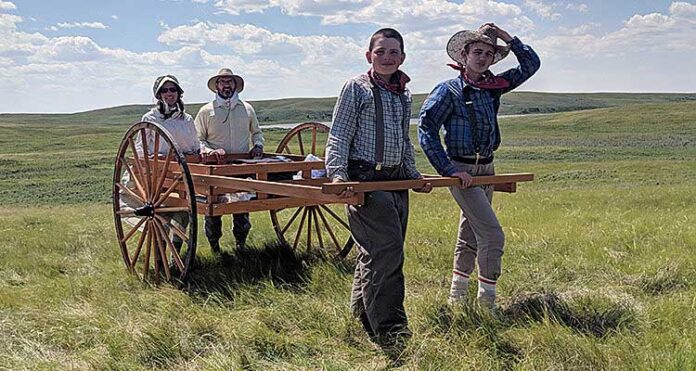 Meadow Lake’s Kirt Prete recently took on the role of “patriarch” during an event very reminiscent of a scene from Little House on the Prairie. From July 6-9, a group of 80 Saskatchewan teenagers gave up their cell phones and the comforts of home to take part in a pioneer re-enactment that saw them pull handcarts 30 kilometres across the open prairie. The re-enactment took place at the Monet Community Pasture near Elrose, SK and saw Prete, along with his wife, Terri, serve as “Ma and Pa” to a group of 10 youth who formed a “family” for the duration of the trek.”

“The event was sponsored by our church – the Church of Jesus Christ of Latter-day Saints – and we were asked months ago to be a part of it,” Prete explained. “It was a great experience. Any time we’re asked to do something to serve or to help youth, we always do our best to make it happen.”

Participants in the adventure included Mormon children between the ages of 14 and 18. Their goal was to recreate the experience of the pioneers who crossed the American west to reach the Salt Lake Valley. From 1856-1860, many Mormons crossed the plains with handcarts, which were cheaper and faster than a traditional wagon train.

“It was a very interesting experience to take part in,” Prete continued. “It was especially nice to see how the youth interacted with each other and with us when you took away technology and the comforts of life… it was fascinating to see how the youth responded when the distractions of our day were removed and they were provided the chance to connect on an emotional and spiritual level with those who sacrificed everything to be able to freely worship God.”

Prete, who noted he and his wife would gladly volunteer to be a part of future re-enactments if asked, went on to say the most challenging part of the journey for him was not being able to physically help the teens pull their handcarts.

“We were allowed to offer encouragement and direction, but we couldn’t actually help pull them,” he said. “That was the hardest part for me, but we understood the purpose was for them to live up to their own abilities and to find a way to achieve success on their own.”

The Pretes were one of eight couples to serve in “Ma and Pa” roles. Each family pulled an authentic handcart that featured real buggy wheels made by Amish craftsmen.

“It’s a powerful experience with the potential of changing lives,” noted Chuck Shugart, trek leader and veteran hiker. “I believe (opportunities like this) help youth appreciate those who went before them and struggled for their faith.”

Among those who took part in the re-enactment was 14-year-old Meadow Lake area resident Matthew Fillion. His favourite part was a dance held on the Saturday night that included the musical accompaniment of five fiddlers.

“Through all the sorrow they (pioneers) had, they also had music and dancing, and they were joyful,” he stated.