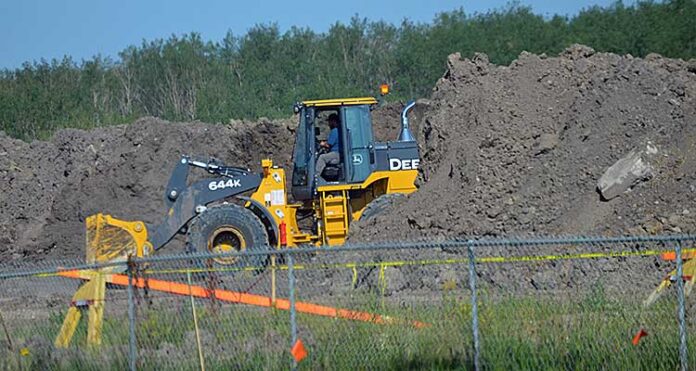 Patience and hard work are expected to pay off in a big way not only for Flying Dust First Nation, but the neighbouring community of Meadow Lake as well.

Recently, Flying Dust continued remediation work on the land just north of Railway Avenue in an effort to return it to its original state before it can be altered to meet the growing need of 21st Century society.

“That land originally belonged to Flying Dust First Nation, but it was expropriated years ago by CN Rail,” explained Albert Derocher, Flying Dust’s economic development advisor. “We’re still going through the process of getting that land back, but before that can happen it needs to be remediated back to its original state.”

This, Derocher added, essentially means the land needs to be properly cleaned up before any new development can take place on it.

“There are still a lot of hydrocarbons there – it was the site of some bulk fuel stations – but we’ve been working at cleaning it up for the past three years now, while also negotiating with the federal government to get the land back so we eventually can develop it,” he said. “Hopefully something can start to happen in the next 12-18 months.”

Flying Dust has yet to hold any discussions with potential companies or businesses that could be established locally because, according to Derocher, the band wants to make sure everything is ready to go before getting anyone’s hopes up. Through the efforts of a Saskatoon-based engineering firm and local manpower, the remediation work will continue up until the fall.

“We’re also removing some of the old rail bed and whatever contamination we find is being sent to Secure Energy in Tulliby Lake, AB for testing and to make sure things are being handled as they should,” Derocher stated. “Once everything is finally ready, it will be an opportunity for more businesses and services to set up shop in the Meadow Lake area – whether they be franchises or mom and pop stores – which will create tremendous opportunities for area residents.”

Meanwhile, the city itself is not without its share of vacant property which cannot be currently developed because of the necessary cleanup that would need to take place first.

“We don’t have a listing of brownfield or contaminated sites,” remarked city manager Diana Burton. “I can comment in general, for municipalities, the brownfield remediation is a time-consuming and costly measure. Because of the nature of the system under which we operate, we often become the owners of such sites (through tax enforcement) and are left having to deal with the contamination caused by others.”