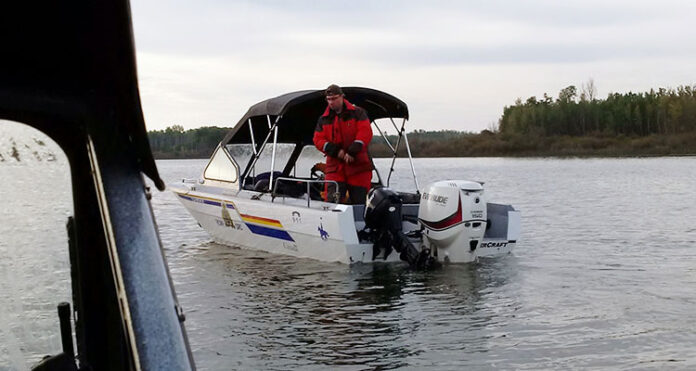 The float plane that’s rested at the bottom of Peter Pond Lake for the better part of 60 years could soon see the light of day.

Members of the RCMP’s Underwater Recovery Team (URT), with assistance from Buffalo Narrows RCMP, were onsite at Peter Pond Lake Monday and Tuesday of last week (Aug. 27 and 28) to assess the possibility of a recovery dive involving what is believed to be the Cessna 180 that went missing in 1959. The wreckage was located earlier this summer by a private contractor who specializes in underwater sonar searches.

According to RCMP, however, the team encountered a number of challenges last week including access and distance, low visibility and significant depth.

“The dive site is two hours by boat from the staging point on shore, while the wreckage is approximately 60 feet below the surface,” noted an RCMP spokesperson. “But it was the strong winds and high waves that posed the biggest obstacles. While some additional sonar imaging was completed and a remote underwater vehicle deployed, surface boats could not maintain their positions in the conditions.”
URT supervisors have determined the safest course of action is to delay another potential dive attempt to winter when the ice can be used as a staging point/dive platform and visibility is expected to improve.

“The safety of our divers and support members is our top priority,” the RCMP continued. “If conditions are deemed too dangerous, no dive attempt will take place.”

However, URT remains optimistic a dive can be performed at some point that would allow for a visual and physical inspection of the wreckage, confirmation it is the missing plane from 1959, photographs to document the site and the possible recovery of any human remains or articles belonging to the two occupants who were on-board.

The small plane crashed Aug. 10, 1959. Along with the pilot, Raymond Gran, the only other occupant was Harold Thompson, a Department of Natural Resources officer. The crash occurred during the morning in what has been described as foggy conditions.

According to the Canadian Press, Gran’s brother, Maurice, spotted an oil slick on the water a few days after the plane’s disappearance. Other items – including two un-inflated Mae Wests (life preservers), rations and a brief case – were located on closer inspection by a Royal Canadian Air Force helicopter, but the plane itself went undiscovered for decades. That all changed earlier this summer when a the private contractor , who is based in the U.S., was hired by the late Raymond Gran’s daughter, Linda Kapusta, and her husband, Don, to launch another search, this time using the advantages of 21st Century technology.

“I didn’t think it was ever going to be found,” Linda Kapusta, who now resides in Toronto, said when contacted last month. “Of course we were hoping the search would be successful, and, incredibly, it was. They found the plane on the first day. They had budgeted two weeks for the search, but after setting out around 8 a.m. July 30, they had located it by 6 p.m.”

According to the RCMP further updates regarding the plane’s eventual recovery will be provided when there is new information.