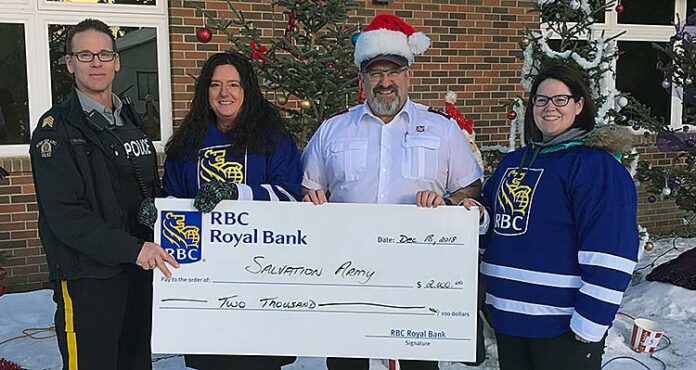 Who needs the man in red when you have the boys and girls in blue?

Members of the public were invited to visit the front lawn of the detachment to view a series of Christmas trees decorated by RCMP members and staff. Votes were accepted in the form of monetary donations with the tree that raised the most money being declared the winner. According to Meadow Lake RCMP Cpl. Rielly Knock, however, the Salvation Army and the people it serves were the real winners, as, overall, the contest raised a total of $3,728 in donations.

“It’s all for the Salvation Army,” Knock said. “That organization plays such a big role in the community. Peter and Karen Eason always do so much… We also believe in supporting local, especially when you see the impact the Salvation Army has and how important that group is to so many people in Meadow Lake and the surrounding area.”

The event also featured a barbecue hosted by the Meadow Lake Co-op, while other businesses and organizations throughout the community contributed in different ways including RBC which donated $2,000 that afternoon, as well as Ron’s Plumbing and Heating, TPEC, Canada Post, Multiworks and Meadow Lake Properties.

Maj. Peter Eason of the Salvation Army described the RCMP’s event in one word – “fantastic.”

“We are very grateful for what they have done,” Eason said. “It seems everyone steps up when there’s a void.”

According to Knock, this could be only the beginning.

“I’m sure we will organize something like this again next year,” he said.

“This is our first year, so we still have a few kinks to work out but I’m sure next year’s Christmas tree contest will be bigger and better. I should also note all the hard work (RCMP staff member) Vivian Thickett put into making this happen. It was her brainchild and wouldn’t have happened without her.”