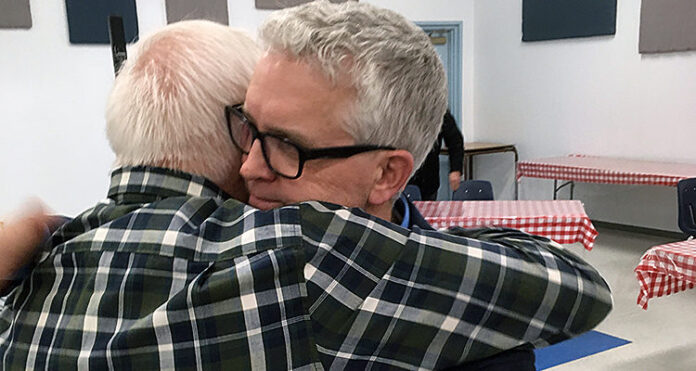 Gary Vidal is one step closer to occupying a seat on Parliament Hill.

Following a week of voting at various locations throughout the Desnethé-Missinippi-Churchill River riding including La Ronge, Spiritwood and Big River, the current Meadow Lake mayor was selected as the Conservative Party’s official candidate heading into the 2019 federal election. The final day of voting took place Thursday (Dec. 13) at the Catholic Church Hall in Meadow Lake.

“It’s really humbling, it’s overwhelming, thank you everybody,” Vidal remarked during his victory speech. “It’s hard to even know what to say, but first I would like to thank Marj, Al and Richard for taking this on. When you seek an elected position of any kind at any level, it’s a huge commitment. It takes courage, it takes some fortitude and these people have shown that.”

Vidal garnered the majority of votes from Conservative members in the riding, edging out fellow nominees Al Jurgens, Richard Nelson and Marj Matchee.

“Because of their interest and involvement, Conservatism in northern Saskatchewan is much stronger today than it was even just a few months ago,” Vidal continued. “These folks deserve a whole bunch of credit for that because they reached into places and not one of us could have done it by ourselves. Having four people in the race allowed us to reach places we never could as one single candidate. Thank you to these three folks.”

Vidal went on to recognize his numerous supporters during his bid for the candidacy, including his friends and family.

“I had a great team of people helping me,” he said. “When I finally decided I was actually going to seek the candidacy, we thought we would gather some people together just to have some conversation and maybe share some names we could go out and contact. I thought four or five people might show up, but we had 15 people show up. It started from there. People were added to the mix, they reached out, I can’t even imagine how many people from our community and throughout the riding encourage others to buy memberships.”

He also described Thursday’s victory as only the beginning.

“I’m a hockey guy and the only thing achieved so far is I’ve made the team,” he said. “We got through the preseason and we’re still on the roster so to speak. Now the work starts. It’s going to be a long journey to next October and it’s going to take a whole bunch of people. We’ve started with a great group of people tonight and I think we’re going to build on that group of people and we’re going to get it done next year.”

As for his role as mayor, Vidal said he plans to hold on to the position for the foreseeable future.

“Yes, I am absolutely allowed to stay on (as mayor),” Vidal said. “What I will do, I don’t know. I will consult with council, see what their desire is and if their desire and what I am able to manage lines up, great. And, if they want me to go, I’ll go. But. we’ll talk… You don’t make decisions like that tonight.”

The 2019 federal election is scheduled for Oct. 21. Currently, the Desnethé-Missinippi-Churchill River seat is held by NDP MP Georgina Jolibois who has indicated she plans to seek re-election.

In spite of coming out on the losing end of last Thursday’s vote, the unsuccessful nominees looking to represent the Desnethé-Missinippi-Churchill River come next year’s federal election all put their support behind Vidal when he was named the winner.

“Gary and his team did an excellent job,” Jurgens noted. “To anybody involved with him – congratulations. For a nomination race, you did fantastic. Gary, we’re all behind you.”

“Gary is going to do very well,” she said. “The important thing now is we all stand behind him, we push and we push and we get all kinds of memberships. Gary, you have our support and you know we are behind you, so let’s rally together.”

Also in attendance at the Catholic Church Hall in Meadow Lake Thursday night was Meadow Lake MLA Jeremy Harrison, who spoke favourably of Vidal prior to the votes being counted.

“I am proud to stand with my friend, Gary Vidal,” Harrison said. “I’ve known Gary most of my life. I think he is the right person to be our candidate for three reasons. Firstly, Gary is doing this for the right reasons. He has never aspired for this job as he never aspired to be mayor. Gary has a servant’s heart and is doing this to serve his fellow citizens. Secondly, Gary has the experience and the character to do the job well. And, thirdly, I can tell you firsthand we need to defeat the Trudeau government. We need to win this riding to win the national election.”