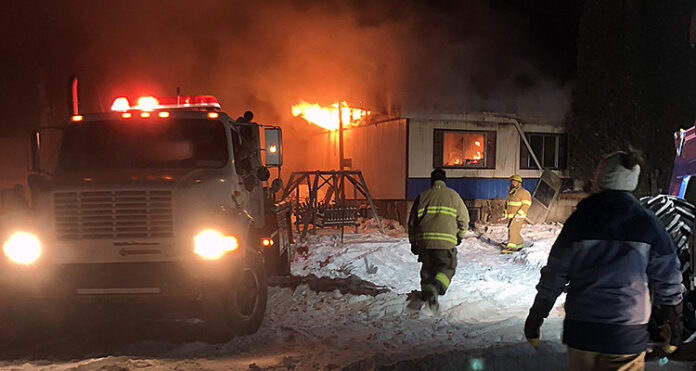 It wasn’t the start to the New Year a Makwa area couple was hoping for, but – if anything – Bob and Diana Gristwood hope the fire that destroyed their home this past weekend serves as an eye-opener for other area residents when it comes to taking the necessary steps to protect their property.

“We heated our home with wood, but as best I could determine the chimney itself is not what caught on fire,” Bob Gristwood explained while recalling the events of last week. “My chimney went through the wall and up the outside of the house. I also had a three-sided wood box around it covered with tin. When I went up there with the fire extinguisher, the fire was between the chimney and this outer box.”

Gristwood believes the creosote buildup from his chimney spilled over, igniting the wood box which led to the outer wall of the house catching fire. This occurred just before noon Friday (Jan. 11).

“I was home alone at the time,” Gristwood continued. “My wife was at work… I did the best I could do with the fire extinguisher until the fire department could arrive.”

“They had it out and were monitoring it, soaking any hot spots,” Gristwood stated. “Later that night, I left for about 45 minutes and I guess one such hot spot flared up.”

This flare up reignited some of the debris which ultimately led to the entire structure burning to the ground.

“We were called back around 11:30 p.m. and were on the scene until about 3 a.m. Saturday,” Heron noted. “The house was pretty much a total loss. This particular hot spot must have been well hidden and it really doesn’t take much for fire to spread.”

The Gristwoods, meanwhile, have been staying with their daughter who lives nearby.

“We moved into that house about 21 years ago, we made it our home,” Gristwood continued. “I still have cattle there and we aren’t planning on leaving the area, but what we’re going to do exactly at this point remains to be seen. I was diagnosed with cancer three years ago, so it’s been a tough time. We’ll have to weigh our options… We lost a lot of important stuff, but, in the end, it’s just stuff. The good thing is no one was hurt.”

Gristwood also said the couple had recently been discussing the need to clean any buildup from their chimney.

“But, when you put things off a day or two it eventually turns into weeks or even months,” he said. “And, no matter how many precautions you take, things like this can still happen.”