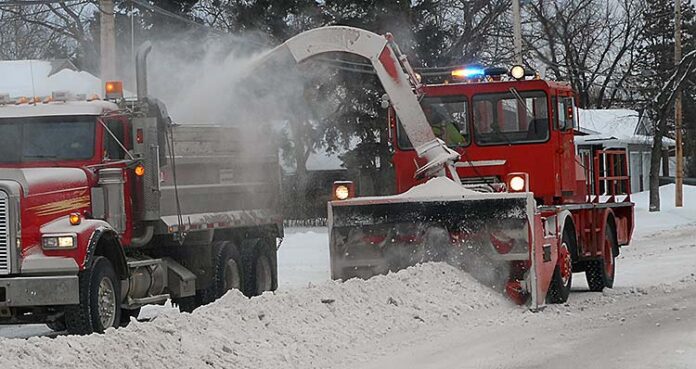 That’s what the City of Meadow Lake has to say to any future winter onslaught thanks to the latest addition to the public works department’s collection of snow cleanup equipment.

“The public works budget proposal for 2019 included the purchase of a new loader/snowblower in order to clear snow off the streets more efficiently,” explained city manager Diana Burton. “At the October budget meeting, council agreed this would be worth pursuing, but requested the department look for something used with a lower purchase price.”

The public works department ultimately found and purchased a 1987 machine for $26,500 from a local seller and, in order to get early possession of the snowblower, council authorized the purchase within the 2018 budget.

“The city and the seller had to do some work on the machine to get it ready, and public works started using it Jan. 10,” Burton continued. “They have found the addition of this type of equipment to be a significant improvement in their operations. The time to load a dump truck with snow has been reduced from three to five minutes (using a loader) down to about 30 seconds with the blower. There are also safety improvements with the blower as there is no need to back into intersections, which also means less wear and tear on pavement when compared to using the loader.”

Mayor Gary Vidal said the purchase of the snowblower is another step forward for the city, which used to plow snow to the side of the road resulting in residential driveways being blocked by snow before plowing the snow in a way that created windrows in the middle of the streets that, in some cases, remained there for several days before city workers could haul them away.

“This (use of the snowblower) should also alleviate some issues with regard to excess snow melting in the springtime,” Vidal said. “It’s a mater of us finding ways to improve efficiencies.”

However, in spite of the many benefits the city sees in the machine, it isn’t without its faults.

“With the age of the machine there are some concerns about the long-term ability to do repairs,” Burton stated. “The city is currently using it on a temporary trial basis. If the department does decide to return the piece of equipment, we will likely take a report to council looking to either obtain a different used machine or putting this back on the table as a 2020 budget discussion.”