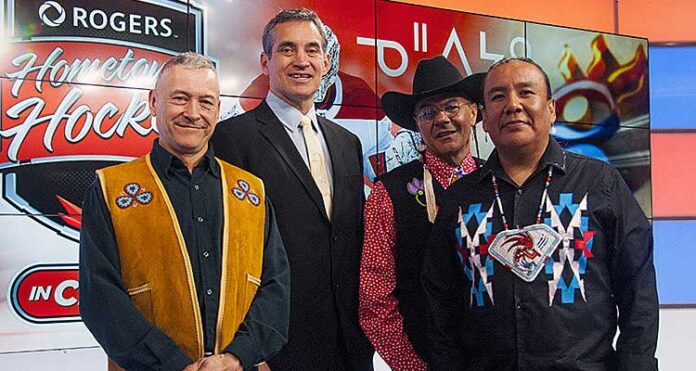 A well-known hockey broadcaster from northern Saskatchewan, Clarence ‘Tsi-Boy’ Iron, improved his ratings recently while making history as being the first play-by-play announcer to call a game on national television in Cree.

“We woke up the Cree listeners,” he said after Sunday’s NHL game between the Montreal Canadiens and Carolina Hurricanes. “Here in Pinehouse Lake, where I’m on the air at CFNK, people know me and know I speak my Cree language regularly. When I came home yesterday I walked around town and it was normal – they just treat me as an ordinary guy. But, when I was at the Saskatoon airport on my way home, people there thought I was a real right-up-there kind of guy, like a movie star.”

Iron, 58, and a radio broadcaster some 30 years, was selected by the Aboriginal Peoples Television Network (APTN) for the weekend gig.

“Before Christmas they were looking for a Plains Cree play-by-play announcer, but it never dawned on me to jump on it,” Iron said. “But some of my friends started telling me it’s a good opportunity and I should try it because I already call hockey here all over the North.”

He applied and received a return call from one of APTN’s top brass.

“The guy was very convincing and the more I thought about it, the more I thought it would be good and maybe open doors for the next generation,” Iron said. “They wanted a demo tape, so I told him I’d have to look around and see if I still had any of my old cassettes. Most of the games I did were in English, with a bit of Cree thrown in to liven it up, so to speak – no more than a couple minutes each time.”

Iron found his old tapes and sent in a few 50-second clips from one of the Meadow Lake Métis hockey tournaments from the 1990s.

“From there I was their guy,” he said. “I signed a weekend contract where they would pay for everything. ‘We’ll fly you out of Pinehouse, to La Ronge to Saskatoon to Winnipeg, where our studio is,’” the APTN guy said.

The panel was set up at the APTN studio in Winnipeg.

“I’ve never been in a studio like that before,” Iron noted. “The game was in Carolina with the feed coming in to us in Winnipeg. Once I had my headset on I could hear the hockey sticks banging and the puck being shot. All I had to do was call the game as I saw and heard it.”

Iron said it was somewhat different than what he is used to because, in the past, he was right in the rink.

“I wasn’t scared or worried about my Cree. I think I could have done better if I had been in the actual arena because I couldn’t see plays behind the scenes like when the teams are changing lines,” Iron said. “As for the game itself, it was good and fast.”

Preparation prior to Sunday’s broadcast had Iron memorizing both teams’ player names and their respective numbers.

“We had a game rehearsal the night before, said Iron. “I actually called the Saturday game between Montreal at Buffalo for APTN. That didn’t go nationally, but we learned a lot and carried that forward to the next day.”

The game of hockey has been part of Iron for most of his life.

“I began listening to Hockey Night in Canada on the radio when Foster Hewitt was doing it,” he said. “Then later, on TV, it was Danny Gallivan and, oh how I wanted to be just like him. I tried to imitate him everywhere I went. Even if it was just a soccer game at my residential school.”

As for any future games of this kind, Iron said it’s up to APTN and Sportsnet.

“Even if you didn’t understand a word, you could feel the excitement in the call,” said Joel Darling, executive producer of special events at Sportsnet. “That was exciting. It was entertaining and really fun to listen to.”