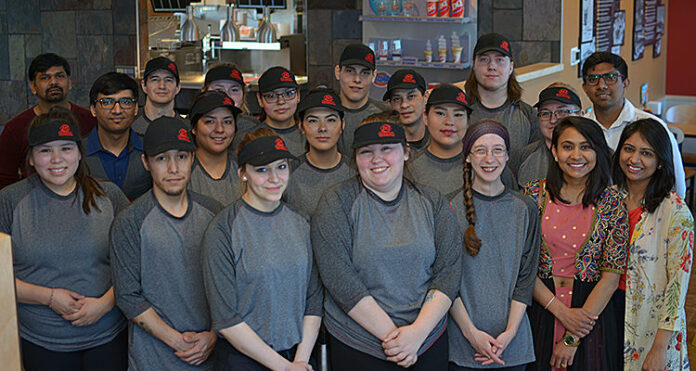 Another popular brand name restaurant has made its way to Meadow Lake.

The new DQ Grill & Chill has been in the works for about a year and is now open on the west side of Meadow Lake near two other well known franchises – Tim Hortons and Boston Pizza.

“We are very excited to finally be here,” said Siddharth Patel, one of the three partners who has moved here from Cold Lake, AB where the group also owns and operates a Dairy Queen franchise. “We’ve had great people working on the building and we are now ready to serve the people of Meadow Lake and area.”

Patel noted he didn’t hesitate at the opportunity to come to town and open a second DQ outlet.

Groundwork on the project began in September of 2018, and the building was closed in by Christmas. Contractors then worked steady the past three months and they’re about a month ahead of their originally planned opening.

A call for employees went out in early March and staff training followed.

“We had a couple franchise support team members from head office in Toronto here the last two weeks helping us train the new staff,” Patel said. “We have a staff of 37 (part-time and full-time) so we’re pleased to contribute to the local economy. Our staff is separated into three areas; the service team, grill team and chill team and they’re all very enthusiastic about working here.”

One of the most world-renowned food and treat companies, Dairy Queen first opened its doors in 1940. Since then, they’ve been able to satisfy millions of loyal customers and franchisees around the world while preserving their legendary heritage.

Their food menu offers a variety of items which promises to satisfy.

“In think what’s going to be popular here is our grilled burgers, chicken sandwiches and our crispy chicken salad,” Patel said. “One of my favourites is the chicken and waffles chicken strip basket – that’s fairly new and customers like it a lot.”

As well, Patel said their trademark soft ice cream is sure to continue to be a favourite along with their Blizzards, sundaes, banana splits, frozen cakes and more.

Open from 10 a.m. to 10 p.m. seven days a week, DQ new slogan is ‘I am Fan Food, not fast food’ and the new building has indoor seating for about 100, an outdoor patio section as well as a drive-thru lane.