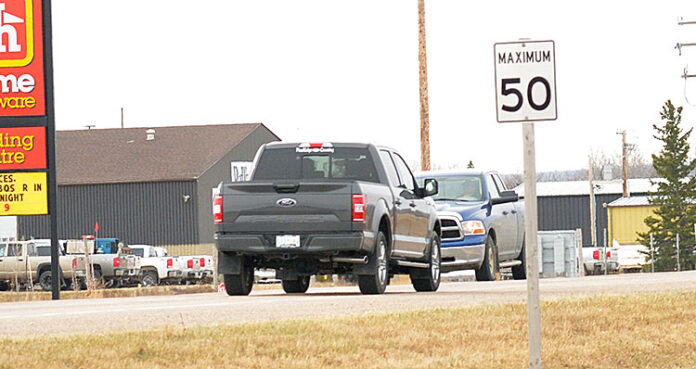 In Meadow Lake, the rules of the road have changed… slightly.

During the regular meeting of city council held April 23, second and third readings were given to a traffic amendment bylaw, resulting in a series of changes motorists will soon have to grow accustomed to when traversing city streets.

“In regard to the bylaw changes, we’ve had some questions and concerns brought to our attention by the public as well as city staff,” noted acting mayor Merlin Seymour.

In response to these concerns, one of the biggest changes, Seymour said, is reducing the length of the 50 km/h zone on Highway 4 north of Railway Avenue. Originally, the bylaw stated drivers had to adhere to 50 km/h from the Highway 4-Railway Avenue intersection for 1,100 metres whereas that distance has now been reduced to only 720 metres. A clause was added, however, making it a 70 km/h speed zone between the 720 and 1,100-metre mark north of Railway Avenue.

“We have decided to change the speed limit going north on Highway 4 to have a bit of a transition coming into the city as there was a concern going from 100 km/h to 50 km/h,” Seymour explained.

Additional changes include the erection of several yield signs at T-intersections throughout the community. New signs will be posted at: 2nd Street East at Centennial Court; 3rd Street East at Yaychuk Place; at both the north and south entrances of Clark Crescent at 3rd Street West; 5th Avenue West at Bauman Street, 6th Street West, 7th Street West and Esau Street; 8th Avenue East at 1st and 2nd Street East; 9th Avenue East at 6th Street East; 9th Avenue West at both the east and west entrances of Dunfield Crescent, as well as Jackson Drive; Bridger Drive at the east and west entrances of Gibson Crescent along with Larocque Drive; Centre Avenue at Palenchuk Place; Esau Street at Evans Place and Golf Course Road at Lajeunesse Lane.

“The addition of some yield signs at T-intersections will hopefully make these areas more safe as some rules of the road are not being followed properly by some drivers,” Seymour said.

According to acting city manager Jessica Walters, discussions surrounding the amendment of the traffic bylaw date back quite some time.

“This conversation started last year with a request brought forward by a councillor to look at installing yield signs on Bridger Drive,” Walters stated. “Administration’s recommendation at the time was to have a comprehensive review of traffic signage and patterns done before making these types of decisions, and so council directed for the engineering department to conduct a traffic review.”