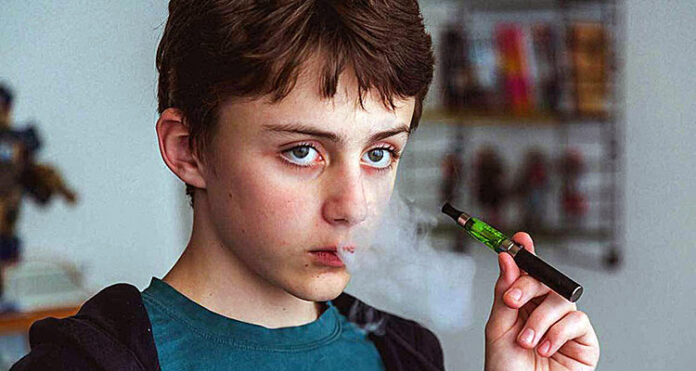 When it comes to the increasing popularity of e-cigarettes amongst students, the Northwest School Division has asked for outside sources to butt in.

Recently, Thyra Berg, program manager at Positively Parenting in Meadow Lake, began touring area schools in an effort to set the record straight about vaping and why children and parents alike should learn the facts about what’s still a relatively unknown practice.

“The Northwest School Division is having some issues with kids vaping, so they contacted us back in December to ask if we conduct presentations on the subject,” Berg explained. “At that point we never had, but I looked into it, did the necessary research and was able to put together presentations that range anywhere from 30-45 minutes.”

Carpenter High was the first school she visited, stopping by each home room to speak to the entire student body.

“I was very careful not to appear as though I was giving a lecture, but I did want to focus on the risks involved as well as the intended purpose of electronic cigarettes,” Berg said. “As young adults, these students need to make some informed choices.”

An electronic cigarette or e-cigarette is a handheld electronic device that simulates the experience of smoking a cigarette. It works by heating a liquid which generates an aerosol, or “vapour” that is inhaled by the user. Using e-cigarettes is commonly referred to as vaping. The liquid in the e-cigarette, called e-liquid or e-juice, is usually made of nicotine, propylene glycol, glycerine, and flavourings. Not all e-liquids, however, contain nicotine.

In addition to her visit to CHS, Berg also made presentations in St. Walburg and Dorintosh, and will be heading to Glaslyn in the next few weeks.

“The students have been very receptive,” she said. “The important thing to remember is e-cigarettes have been on the market for some time, and we need to get the necessary information out to the consumers. Kids may not be aware there is nicotine in the pods they’re using, and it’s important to understand the health risks involved.”

NWSD superintendent of student services Jennifer Williamson said the division is grateful to Berg for her assistance.

“We have seen a huge increase in the number of students who are vaping,” Williamson said. “Based on the lack of knowledge that’s currently out there, we felt it was a good decision to get Thyra into the schools so our students can make informed decisions. I believe a lot of young people are vaping because they think it’s safer than smoking cigarettes, and it very well could be. But, it can also be a gateway to smoking and someone who would never have picked up a cigarette is now vaping, which increases his or her chances of actually becoming a smoker one day.”

Berg said it would also be nice if more parents got on board and educated themselves on this subject.

“There are some parents who actually support their kids in this habit, and I believe they do so without knowing how bad it could be,” she said. “They need to do their homework. Vaping was designed to help smokers cut back, but now non-smokers are beginning to vape. It could be a segue that introduces young people to actual smoking.”