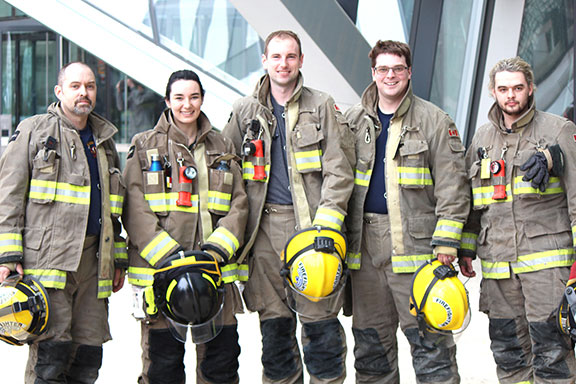 A group of Meadow Lake firefighters joined their peers from across Canada and the world this past weekend in an effort to bring the fight against cancer to new heights.

Representing Meadow Lake Fire and Rescue at the annual Firefighter Stairclimb Challenge at the Bow tower in Calgary (the tallest building in Western Canada) were Keenan Gill, Chris Gill, Joe Hallahan, Andrew Clements and Macylin Relitz. According to Keenan Gill, raising awareness and support for people living with cancer is a cause he holds near and dear to his heart.

“Firefighters who take part in the challenge each year are required to collect donations, all of which go to Wellspring Calgary, a charity that helps firefighters, their families and everyday people deal with cancer – not medically, but rather mentally and emotionally in terms of coping mechanisms and whatnot,” Gill explained.

Close to 600 firefighters from Canada, the U.S. and around the globe took part in this year’s challenge which was held Sunday (May 5). Participants were required to climb 55 flights of stairs (1,204 stairs in total) while wearing their full firefighting gear, which in most cases weighs close to 90 pounds.

“This was my third year doing this,” Gill continued. “The first year I saw a post about it on Facebook and thought it was a great idea. It’s a great fundraiser for people who truly are facing a challenge in their lives, but – if they’re up to that challenge – why couldn’t I be up to this one?”

The following year, inspired by Gill’s experience, two more firefighters joined him for the challenge, while that number again increased to five this year. While he was uncertain how much money local firefighters raised through their respective fundraising efforts, Gill did note hours of training went in to being both physically and mentally ready to complete the event.

“A few of us took our gear to the gym and worked out in it, while we also worked out here at the fire hall,” he said. “We also did a lot of training on our own time so we would be ready. After I finished the Firefighter Stairclimb Challenge the first year, I felt awesome because I had so much adrenaline running through me. Now, I know what to expect. It’s extremely physical, it’s exhausting – we push our bodies to the limit.”

This, however, has not discouraged Gill from continuing to support Wellspring Calgary.

“I 100 per cent absolutely plan to do this again next year,” he said. “Hopefully we can get the community behind us and can raise as much money as we can.”

Starting at 3,400 feet above sea level, this climb is the highest elevation firefighter stairclimb in the world. Wellspring provides programs, resources and support to people living with cancer along with their caregivers. There are 17 presumptive cancers that are a recognized occupational hazard of a firefighter’s job.