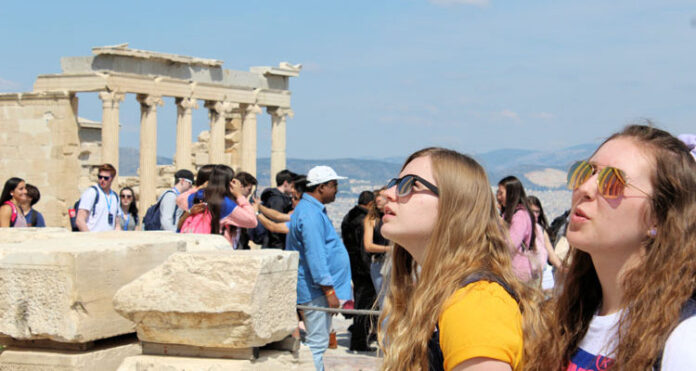 Students from the Northwest have come to realize just how small Saskatchewan is when compared to the much larger world.

Although not technically a school trip, a group of 31 students from Meadow Lake’s Carpenter High School were joined by six chaperones recently as they embarked on a 12-day journey throughout Greece. The outing included several stops at ancient yet renowned landmarks, something CHS teacher Dawn Benoit said was a lot of fun for everyone who took part.

“We visited Athens, and we took a three-day cruise around some of the islands including Santorini (one of the Cyclades islands in the Aegean Sea),” Benoit explained. “As for highlights, the Parthenon (a former temple on the Athenian Acropolis dedicated to the goddess Athena) was the biggie. We also saw the windmills that used to power the islands and there was quite a bit of discussion about some still active volcanoes.”

The group also visited Olympia – the site of the first-ever Olympic Games – as well as a number of old amphitheatres.

“We also got to take part in a traditional Greek night including dancing,” Benoit said “All the kids got up and danced – it was a lot of fun. We also visited Delphi, a mountain town that reminded us a lot of Jasper. The kids were also surprised to see oranges growing on the trees there.”

Benoit went on to say, even though the Greece trip was not a CHS-sanctioned event (it was booked through EF Educational Tours Inc.), it’s not uncommon for similar international outings to be organized each year and for CHS students to participate.

“There’s usually at least one teacher who takes this on each year,” she said. “With the exception of the cruise, I have been to all of these places before, so the highlight for me was seeing the faces of the students as they came to an understanding about the bigger world around them. ”

Among those to participate in the trip was Grade 12 student Logan Boser.

“I really liked the cruise – the entire trip was very enjoyable,” Boser said.

As a high school wrestler, Boser also said it was exciting to be in the country commonly associated with the sport’s origins.

“It was all very surreal,” he said.

As for next year, Benoit will be taking a sabbatical. She does, however, look forward to 2021 when she will visit Florence, Venice and Pompeii among other places.

While perhaps not as exotic as Greece, a small group of students and two teachers from Clearwater River Dene Nation School returned home recently from a trip to Florida.

“Our Grade 11s have been to a number of places over the years – mainly on the west coast, however,” explained teacher Brien Morgan. “The trips have always had a cultural component to them, but this time we wanted to put the focus on just having fun.”

The group visited Orlando and spent a day at Disney World, Universal Studios and Gatorland where they experienced ziplining. They also had an opportunity to visit the beach.

“For most of these kids, if not all of them, it was their first time seeing the ocean,” Morgan said. “We also went go-karting – everyone had a blast.”

“This year we only took four kids,” Morgan said. “We determined who got to go based on marks and attendance. The students also had to fundraise throughout the year if they wanted to go on the trip, so it served as sort of an incentive on all fronts. It was a lot of fun and everyone really enjoyed themselves.”

Of the four students to join Morgan and fellow teacher Cassandra Cometa on the trip was Nick Lemaigre.

“It was the most amazing trip I ever had in my entire life,” Lemaigre said. “It was fun hanging out with friends, seeing new things and there were lots of pretty girls in Florida.”