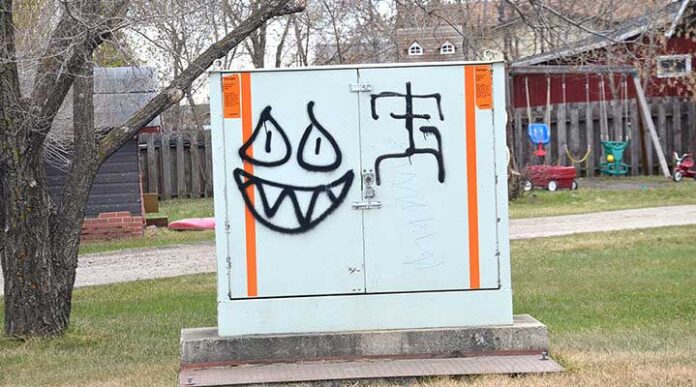 It’s time for the City of Meadow Lake to come clean.

During last Wednesday’s (May 1) RCMP town hall meeting held at the Catholic Church Hall, community safety officer Joe Hallahan informed the close to 20 members of the public in attendance about a new initiative by the city designed to remove graffiti from various locations around town.

“The city now has a graffiti removal strategy,” Hallahan remarked. “Tracy (bylaw officer Tracy Chuckrey) and I have been taking an inventory of city-owned properties. We know the city is a fairly large target for graffiti, and we know we need to deal with that.”

As such, the bylaw department is developing an operational standard for graffiti removal on city property.

“If we want private citizens to do graffiti removal, the city also needs to do it,” he noted. “Part of our strategy is to also provide assistance to property owners to help them remove graffiti. Part of this assistance will be a paint kit voucher they can apply for. That would give them a gallon of paint, a paint brush and a tray in order to cover the graffiti on their property. It may not cover an entire given area, but it would be a help. We know, for the most part, it’s not the property owners who are tagging their own properties, but it’s the property owners who ultimately have to clean up the mess afterward.”

Hallahan said, the long-term goal is to discourage vandals from spray painting property as it will simply be covered up on a continual basis.
In a subsequent interview, acting mayor Merlin Seymour said he has high hopes for the graffiti removal strategy.

“When you drive down the street and see a bunch of painted markings on fences and buildings – whether it’s residential or businesses – it makes one think of the disrespect shown toward others and also think safety concerns for the people of Meadow Lake,” Seymour said. “As a council, we have the opportunity to provide help to those people or businesses affected.”

Along with the graffiti removal strategy, as well as the city’s new Eyes That Care program (see last week’s Northern Pride), Hallahan also spoke about a new private camera registry.