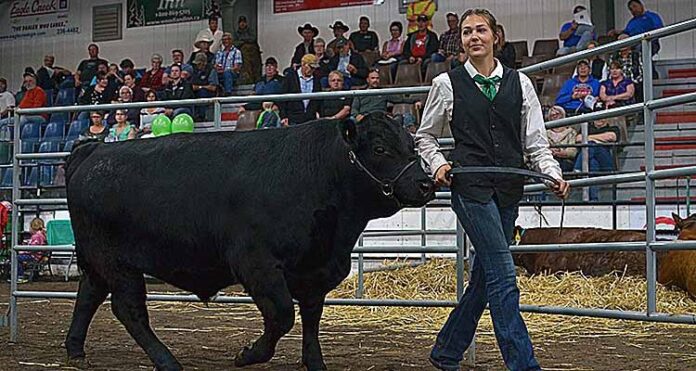 Voted this year’s Grand Champion Steer was Sage Pylot of the Meadow Lake 4-H Beef Club and her black Angus animal from a field of 44 entries.

The award was given June 4 at the 68th annual Meadow Lake District 36 4-H Show and Sale, held at the Meadow Lake and District Arena.
It’s her fourth year as a 4-H member and her first time taking the top prize. Her steer weighed 1,295 pounds and was purchased by Lazar Equipment for $3.60/lb. The reserve grand champion steer went to Jillian Burgess of the Makwa 4-H Beef Club. At the sale, her animal fetched $2.95/lb. from Meadow Power and Equipment.

The previous day, Pylot placed fourth with the same steer.

“It’s different judges and different eyes looking,” she said. “The winner yesterday in our local club was Quinn Tallmadge.”

The season is a long one for all 4-H members as Pylot stated everyone begins the process of looking for their animal in the early winter.

“I chose my 4-H animal in the middle of November,” she said. “I then put it in a pen and started it on a feeding program. From there I worked with it to tame it, and soon after that I work to halter-break it. After that it’s just a matter of perfecting everything.”

Pylot said judges are looking for a certain look of an animal.

“They’re mostly looking at what steer would have the best cuts in terms of meat is concerned,” she said. “Giving your animal top quality feed and keeping track of how much you’re giving it and at what times within the day, week and month is crucial to your success.”