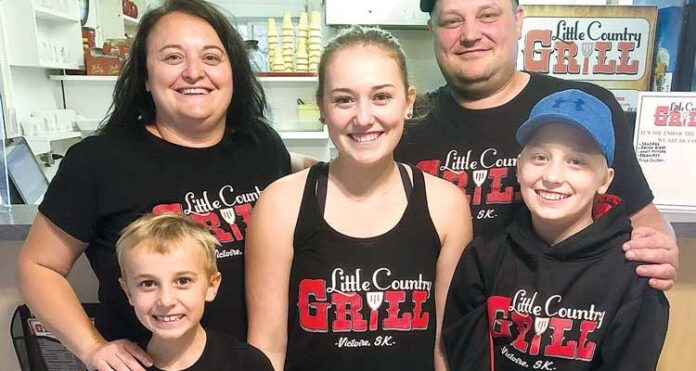 In Victorie, Saskatchewan, close to Morin Lake Regional Park, sits a restaurant called Little Country Grill, famous for its poutine and homemade burgers since 1989. Owned and operated by Les and Liz Bilodeau, the couple bought the business in January 2016 and haven’t looked back.

“We had a cabin at the lake since before I was born, so we’ve been going there since the day it opened,” said Les Bilodeau. “My wife actually worked for one year with the original owner and then the second owner. I took Business Administration and Management at SIIT and [Liz] took professional cooking at [Sask Polytechnic], so I figured we’d make a good team.”

In 2015, to help with the purchase of the business, the Bilodeaus worked with the Clarence Campeau Development Fund, which was established in 1997 by the Government of Saskatchewan and the Metis Nation of Saskatchewan, to assist economic development activities of Metis people in the province.

In 2015 the Bilodeaus accessed the CCDF’s Business Plan program, and then the Business Development program in 2016.

“Right from day one, the CCDF just had a different view; they were willing to help us. I had made a business plan before because I had taken that in college, but business plans are tough, so they helped and made it a lot better,” he said.

Although running the business has been hard work, for Bilodeau it was an opportunity for their family to do something together while spending summers at the lake.

“My kids are learning how to work and they’re learning how to save money. I used to shingle, and run courier out, and sometimes I’d go three weeks without seeing them all summer, and now I see them every day,” he said. “It has improved my family life, where now I’m actually with them all the time. We’re at the lake and we can jump on the boat after work.”

Bilodeau has also been working on putting a mini golf next to Little Country Grill, and plans to work with the CCDF on that project too.
“Right off the bat, they were interested and wanted to know all about it, which just makes you feel like they have your back.” he said. “When I was 16, I actually told my mom that I was going to build a mini golf someday, and here we are 22 years later and I’ve started building it.”

Bilodeau feels the CCDF has been incredibly helpful every step of the way, and offers some advice for anyone just starting out.
“Trust their guidance. They’ve done this with how many business before, and you can’t be scared. I just laid it all on the line, which forces you to give it all you’ve got.”

For more information on Little Country Grill and to find out when they’re open for the 2019 season, visit them on Twitter @victoiregrill or on Face book at facebook.com/littlecountrygrill.