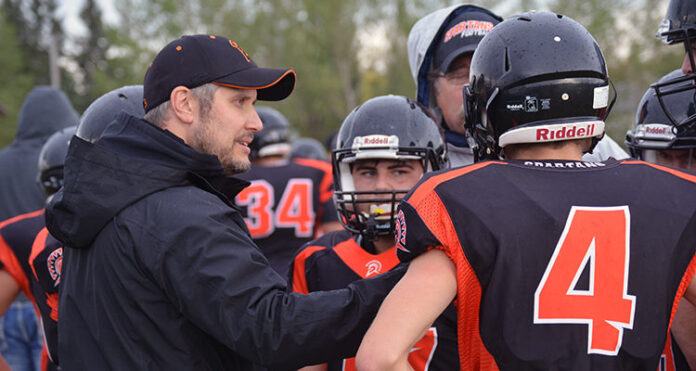 Spring football camp took place last week at Lions Park and, if anything, the Carpenter High School Spartans plan to be a force to be reckoned with when the 2019 season gets underway this fall.

However, one very important piece of the puzzle will be missing.

“Next year I will be working at Maidstone High School where I’ve accepted the role of vice-principal,” explained Sam Dawson, the CHS Spartans’ head coach for the past five years. “Leaving here is bittersweet – not only leaving the school, but all of the great people I have met during my time here.”

Prior to coming to Meadow Lake, Dawson taught for three years in Beauval. His wife, teacher Laura Dawson, is also leaving CHS for a teaching position in Maidstone. Going forward, Dawson said the football program at Carpenter will continue to do well even without his presence on the sidelines.

“We’ve had some really hard years in terms of numbers, but at the same time we’ve still had a dedicated core group of players who were always inspired to come out,” he said. “The lack of a junior program really hurts us, but with the upcoming school restructuring and Grade 9s coming over to Carpenter this fall it could really help.”

The annual spring football camp allowed potential players for the 2019 season have an opportunity to meet their coaches, brush up on their skills or, in some cases, experience football for the very first time.

“I made it to most of those practices,” Dawson said. “Come next year, John Lawson will be back to help with the offensive line, while Mike Connolly will also be back to coach the defensive line. Meanwhile, two other teachers – Tyson Snelling and Kale Lajeunesse, who both work at Gateway Elementary – will also be helping out. As for who will be leading the team from a Carpenter standpoint, Curtis Paylor is the man. From what I understand there won’t be one head coach, however, but rather a collaboration amongst all these guys.”

Dawson went on to say collaboration will be key for this coaching staff.

“Last week we also had some former Spartans come out to help, so I’m sure the team will also have more of that support come next fall,” he noted. “We have coaches, but what the Spartans really need is players. There are some strong kids coming out of Jonas, plus there’ll still be a handful of experience Grade 11s and 12s.”

This was echoed by Connolly who has been the Spartans’ defensive coach for the past seven years.

“We definitely had our youngest group ever on the field last week,” he said. “There were a number of Grade 8s who will be going into Grade 9 this fall, which is awesome because it will help grow the program. We have a lot of talented athletes, but the biggest issue is the numbers. As long as we get the numbers we need the coaching staff will do its part to put together a team that can succeed.”

Connolly did admit, though, Dawson will be missed.

“Obviously Sam leaving is a big loss, not only to the program but to the athletes and to all the CHS students,” he remarked. “He’s been coaching this team for quite some time and his leadership has been huge.”

Not only is Dawson stepping away from the Spartans, but from football as a whole… at least for the time being.

“Unfortunately there is no football program at Maidstone High School,” he said. “They do have a strong volleyball program there, so I believe a lot of the focus and effort goes into that. Personally, I’m fine if I have to step away from the game for a while.”

Dawson also said there is a chance he could turn up in Meadow Lake again sooner rather than later.

“It depends,” he stated. “The division office is located here and there will be administration meetings I will need to attend, so I may find myself back here again before I know it.”