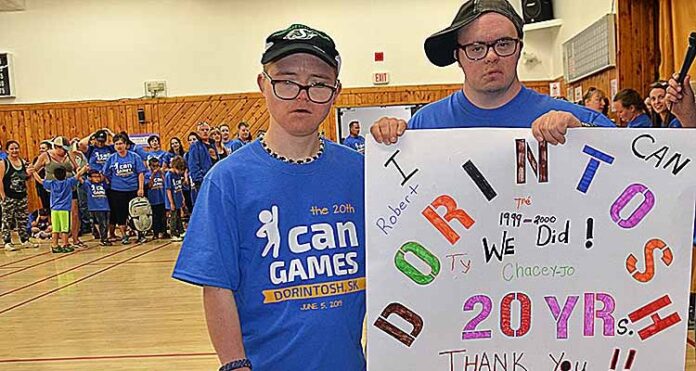 Yesterday (June 5), the I Can Games – an annual activity-filled track meet held at Dorintosh Central School – celebrated its 20th anniversary. According to organizers it was the biggest year in the I Can Games’ entire history.

“One thing I noticed leading up to this year’s Games is the increase in the number of participants and in the number of schools,” explained Sandra Bannister, one of the original organizers of the I Can Games. “Most schools in the Northwest School Division participated this year, as did six or seven Meadow Lake Tribal Council schools and the school from Thunderchild First Nation. This year saw 173 students register whereas past years always saw an average of about 130.”

Bannister believes this year’s increase has a lot to do with the anniversary, as well as the fact she and other organizers did much more to promote the event.

“With this being the 20th year there seemed to be more interest all around,” she noted. “I also did some fundraising this year to help provide T-shirts and some special ribbons, and in doing so I approached a number of businesses and individuals. Many of them were surprised to learn about what we were doing and they really supported us.”

Volunteers, Bannister added, are also key to the Games’ success.

“We had about 170 volunteers this year including a number of high school students, teachers, members of the community, North West College, the Dorintosh Lions Club and others,” Bannister said. “It’s the support of so many people who have made this event what it is. You think after 20 years we’d have it down, but it’s not an easy event to organize. It takes a lot of work on everyone’s part.”

The event itself began Wednesday morning with a grand march where participants entered the school’s gymnasium proudly carrying their respective school banners. After much applause by those in attendance, the students were split into groups and proceeded to participate in the variety of events including the boot fling, bubble blowing and more.

“The I Can Games are very important to the students because they are so inclusive,” Bannister said. “And, anyone can take part. Yes, many of the students have exceptionalities, but they take so much pride in showing how they can do these things. It makes them feel good to meet these challenges.”

This was echoed by Brenda Neufeld, another I Can Games organizer who has been involved from day one.

“It’s been exciting seeing some of these kids take part all the way from Kindergarten through Grade 12,” Neufeld said. “Also, the hug you get at the end of the day and the smiles you see on the kids’ faces makes it all worthwhile.”

Dorintosh area resident Bluesette Campbell was also at this year’s Games to support the many participants including her son, Andrew, who is currently in Grade 11, but has been taking part in the I Can Games since he was very young.

“I am so pleased Andrew had the chance to participate again this year,” Campbell said. “Even though he’ll be graduating next year, I’m sure we’ll continue to be involved however we can.”