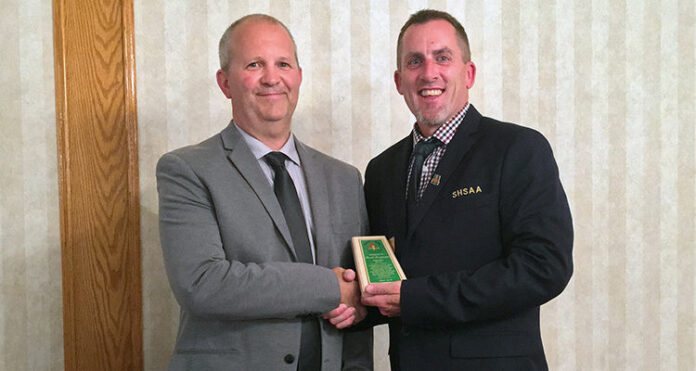 Brad Freyman has done a lot for the athletic achievements of students at Loon Lake’s Ernie Studer School and his efforts have not gone unrecognized.

During the Saskatchewan High Schools Athletic Association’s (SHSAA) 71st annual meeting recently, Freyman was one of several individuals to receive an SHSAA Service Award for his ongoing contributions to high school athletics.

“The SHSAA Service Award is typically given to long-standing people who have dedicated their time and energy to the SHSAA and high school athletics in general,” Freyman explained. “This year, I was one of the lucky recipients.”

Although his full-time role as ESS principal remains first and foremost on his list of professional responsibilities, with the start of another school year just around the corner, Freyman said he is looking forward to continuing in his other position as the school’s athletic director.

“I have given 25 years of service to the SHSAA and the Northwest High School Athletic Association (NWHSAA), which is our regional body,” Freyman continued. “I got started at the school at Canoe Lake Cree First Nation from 1994 to 1996 and then moved on to Makwa Sahgaiehcan First Nation School for another seven years and the last 16 years here at Ernie Studer.”

Although the high school component at ESS is relatively small from one year to the next, Freyman said students compete in every high school sport with the exception of basketball.

“My perception of high school sports is not about making decent athletes and teammates, but more so about making good people,” he added. “Sports provides these kids with an opportunity to get out there, to visit other communities and other schools, and to make connections. I’m always very impressed and very proud of the sportsmanship demonstrated by our student athletes each and every year.”

During the last school year, more than 33,700 students from across the province participated in inter-school activities at the senior level. The SHSAA recognized 200 individual and team provincial champions from the 320-plus schools that make up the SHSAA.

As for Freyman he doesn’t see himself or his school slowing down any time soon.

“I’ve done this for 25 years and, as I approach retirement, I don’t see myself stopping,” he said. “Right now I’m just looking forward to having the kids back at school and we’re going to get things rolling right away with volleyball. We have four teams this year – boys and girls squads at the junior and senior levels – and Brad Arnott will be starting things off immediately with a junior boys tournament the first weekend of the new school year.”

In terms of the award, Freyman said he was both honoured and humbled to receive it.

“I don’t do this for the recognition, but it was still quite an honour,” he said.