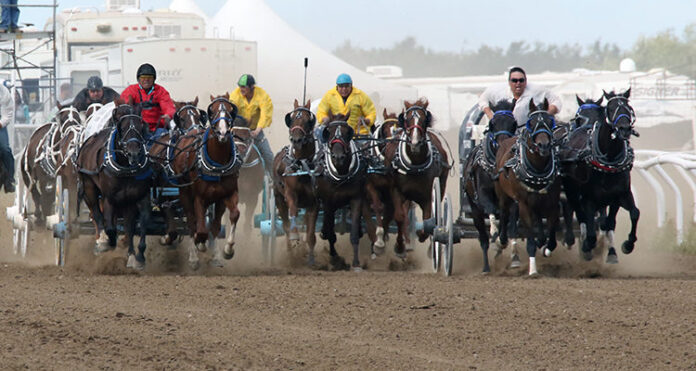 One more Canadian Professional Chuckwagon Association (CPCA) championship was not in the cards for Makwa Sahgaiehcan First Nation’s Ray Mitsuing, but the veteran driver still went out a winner.

Mitsuing tabulated a four-day aggregate time of 5:20.67 to earn the show championship in Lloydminster this past week, but fell short in Sunday’s (Aug. 18) championship dash, finishing second overall to this year’s CPCA champion, Todd Baptiste of Cando, SK.

“I finished second in the dash – I went too wide and couldn’t quite get the result I wanted, but I’m still very happy with how things turned out,” Mitsuing said. “It was my last year as a driver, and I can rest easy knowing – win or lose – I was able to ride away on top.”

Earlier this summer, Mitsuing competed in his final Calgary Stampede. Having reached the mandatory retirement age for that event, he decided to simply call it a career and not return to the wagon box following this year’s CPCA tour.

“I’m kind of relieved it’s over with,” he added. “I have plans going forward with my son, Dale, driving and my other son, Devin, also planning to come back as a driver next year. He and Dale will be taking over the outfit. I still own the majority of the horses, but the boys will be the ones rolling on.”
Sunday’s dash saw Baptiste cross the finish line at 1:18.98 followed by Mitsuing at 1:19.85, Dale Mitsuing (last year’s CPCA champion) at 1:19.97 and Kris Molle of Watson, SK at 1:21.21. Dale Mitsuing said it meant a lot to race against his father during the elder Mitsuing’s final time on the track.

“I was honoured to be part of that final heat and what turned out to be my dad’s final race,” Dale Mitsuing said. “That was my goal this season, and it paid off in a big way.”

Dale Mitsuing went on to say he has no regrets about not repeating as CPCA champion this year.

“I was just really happy with how the horses performed and that they were all able to remain healthy,” he said. “We owe a lot to our sponsors, as well as our entire crew and to the fans. So many people supported the Mitsuing Racing Team this season. Also, congratulations to Todd Baptiste and his outriders on a successful season.”

Ray Mitsuing, meanwhile, said he will look back on the season and his 30-plus years as a chuckwagon career with fondness.

“Sunday they gave me another standing ovation in Lloydminster,” he said. “I have to express my gratitude to the various committees who have looked after us over the years, as well as to the fans who have always given me their support. Ovations such as the ones I have received all season are something a guy can cherish for a long time.”

In addition to winning the show championship in Lloydminster and finishing second in the dash, Mitsuing also won this year’s CPCA Safe Driver Award. Another award winner on the weekend was Meadow Lake’s Kale Lajeunesse who captured the Safe Outrider Award. Baptiste finished first overall in the CPCA driver standings with 1,092 points while Tyler McKenzie of Lloydminster was first in the outrider standings with 5,798 points.