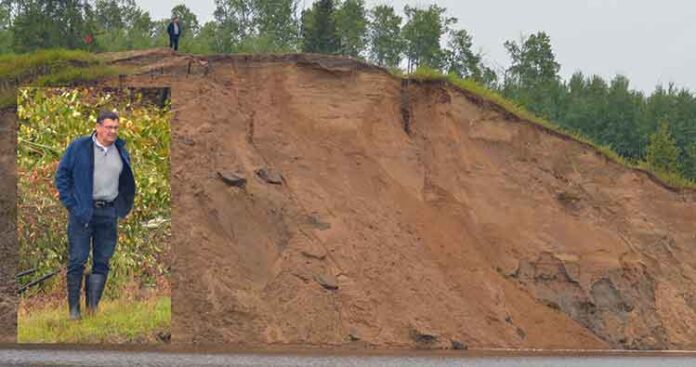 The recent washout that destroyed a piece of Highway 903 north of Meadow Lake is the result of what Athabasca NDP MLA Buckley Belanger believes is a continued lack of support on the provincial government’s part for northern Saskatchewan.

“This isn’t a surprise when it comes to the issue of road infrastructure for the North,” Belanger told Northern Pride. “People from Canoe Lake Cree First Nation, Jans Bay, Cole Bay and from the entire region have been complaining about the lack of investment in northern Saskatchewan and this has been going on for a number of years.”

Belanger went on to say the NDP anticipated such problems would occur because of what he calls a lack of infrastructure investment.

“The current government has been ignoring the North when it comes to highway needs,” he said. “They have been patching up roads here and there without making any major investments. We see there is now some investment north of Green Lake and, while it’s appreciated, those kinds of investments are far and few between. When you do strategic investments into highway infrastructure it helps the economy. When it comes to Highway 903, people use it to travel to and from Meadow Lake to work, to shop, people are travelling for business, you can look at the impact on the forestry sector… this is what happens when people’s advice is disregarded over the years. One minister after another just completely ignored the highway issues northern Saskatchewan has been raising for years and years.”

Heavy rains earlier this summer caused the water at Devil’s Creek – about 75 kilometres north of Highway 55 – to rise to unprecedented levels and the road to be completely washed out. Where the highway washed away there is now about a 30 or 40-foot drop.

Belanger also reiterated the use of Highway 903 by the logging industry is not the only way in which the presence of this highway helps contribute to the local economy.

“You’d be surprised how many people from Canoe Lake work with organizations such as the Meadow Lake Tribal Council,” he said. “The shopping that happens in Meadow Lake by people in these northern communities also has an effect on the local economy – everything from people travelling these roads for work or for goods and services along with the larger resource development matter such as forestry, all of these benefit the economy and that’s why the government needs to be fair when it comes to infrastructure investment, but this government has not been.”

Ruth Iron, health services agreement officer with MLTC, confirmed the impact the washout has had on MLTC workers who regularly travel to northern communities.

“It does add a lot of travel time, which normally wouldn’t be an issue, but with construction ongoing on Highway 155, you really have to plan your trips,” she said. “It can take an extra 15 or 20 minutes up to an additional 40 minutes depending on the work being done.”

Belanger said the government has been warned many times, but these warnings have been ignored.

“Capital spending on northern highways is minimal,” he stated. “When they talk about investment into roads, I can guarantee 95 per cent is maintenance, four per cent is culvert replacement and the last one per cent is capital. They can’t continue to hoodwink people who are paying attention.”

According to Doug Wakabayashi, a spokesperson with the provincial Ministry of Highways and Infrastructure, efforts will soon be underway to reconstruct the highway and reopen it to the public.

“We have a design in place and are in the process of procuring a contractor,” Wakabayashi said. “We hope to have work underway by mid-September.”