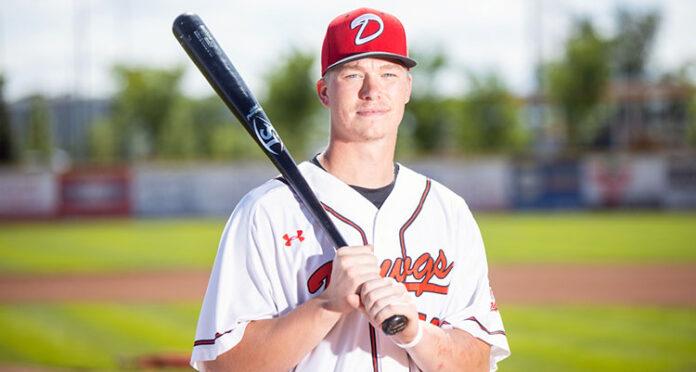 Esau, who leaves for St. Leo, Florida this week to attend his final year of post-secondary education, helped Okotoks gain a 1-0 series lead over the Lethbridge Bulls in the Western Canadian Baseball League Divisional Final this past Sunday (Aug. 11).

“I found myself up to bat at the bottom of the 9th, with the bases loaded and one of the best pitchers I’ve ever faced on the mound,” Esau said. “The score was tied 5-5 and the count was up 3-2, but I knew, with the bases loaded, there was no way he was going to throw a slider. He threw a fast ball and I got a base hit out to left field that gave us the 6-5 win and the series lead.”

Esau described the scenario as every young ball player’s dream when he or she grows up playing wiffle ball in the backyard.

“I found myself in that situation, but had a lot of fun and made the most of it,” Esau said.

Esau was not scheduled to be in attendance for Game 2 of the series Aug. 12, however, because he was preparing for his return to school. Last year, he attended the University of Houston and played baseball as a member of the Cougars. Prior to that he attended Frank Phillips Community College in Borger, Texas where for two seasons he played ball as a member of the Plainsmen. He transferred to St. Leo University this fall where he will play as a member of the Lions and complete his studies in psychology. In the past he has also attended school at the Okotoks Dawgs Baseball Academy in Alberta and, each summer, returns to the WCBL for its short, two-month season.

“I would have liked to have finished this year’s playoff run with the Okotoks team, but school starts Monday so I have to travel to Florida this week,” Esau noted. “As it is, though, I couldn’t have asked for a better season. We set a record for total wins during the regular season, were first overall in our division and defeated Edmonton in the first round of playoffs after always being eliminated by them for the last several years.”

As it turns out, the Dawgs dropped Game 2 against Lethbridge by a score of 5-1 forcing Game 3 Tuesday (Aug. 13) in which they were able to rebound and gain a 4-3 victory. The Dawgs now advance to the WCBL championship series to face the winner of the still-to-be-decided series between the Regina Red Sox and the Swift Current 57s (a team Esau played for in 2017). Meanwhile, during the regular season, Okotoks earned 38 wins and had 15 losses. Esau, an infielder, played in 42 of those 53 games.

As for his future plans, Esau said he will see where life leads him after his final year of schooling. He does, however, have one more summer in which he’ll be eligible to play for the Dawgs.

“I can’t see myself doing anything but playing baseball, so hopefully somebody picks me up at the end of the season and I will be able to continue my baseball career,” he said.