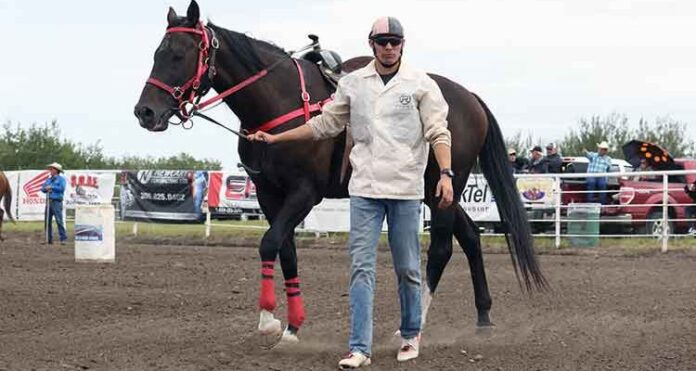 Although he’s only been outriding for the Canadian Professional Chuckwagon Association (CPCA) for one season, it’s a job that comes naturally to Meadow Lake’s Buddy Gran.

“My family has been into chuckwagons my whole life,” Gran remarked. “I even grew up racing chariots, but I never really pursued the big wagons until recently. My friend, Amber L’Heureux, started driving this year and asked me if I would come out and give outriding a shot. So, I attended outriding training and that’s when driver Chance Bensmiller took me under his wing. At first I was only outriding for his non-point wagon, but then driver Louis Stanley picked me up to and, later in the season when outrider Logan Pethick was injured, I ended up getting a lot more work.”

Currently, Gran is ranked six of 13 in the CPCA outrider standings with 1,809.5 points. Leading the charge is Meadow Lake’s Kale Lajeunesse with 5,088.5 points.

“We’re a little short on outriders right now – we only have about eight guys going into this week’s finals in Lloydminster, so we’re going to have to be extra careful out there,” Gran noted.

He also knows all about being careful following a close call during this past weekend’s CPCA races in Turtleford.

“Today was a tough one watching my son outriding,” stated Gran’s mother, Carol, via a social media post Saturday. “The first heat was good, they finished five for the night. In the second heat he had major problems and ended up coming off his horse … I wasn’t sure if he would be out for his next heat, but there he was coming back for the next race and he was safe and clean for that one.”

Gran himself elaborated further stating, after falling from his horse, a damaged quadricep prevented him from quickly getting out of harm’s way in the form of an oncoming wagon driven by Meadow Lake’s Glen Myette.

“My body is starting to give out on me. The inside of my quad is all smashed up,” he said.

Myette, meanwhile, veered his wagon just enough that he ran over a barrel and not the downed outrider.

“The next day we taped my leg up really tight and I was able to ride,” Gran added. “I rode clean that next day and everything would have been fine all weekend if it weren’t for that one hiccup.”

“As a mother I was terrified for him, but as a competitor I knew if he wouldn’t have continued on after his wreck his dream of being an outrider would have been over,” she posted.

The CPCA finals in Lloydminster got underway Aug. 14 and continue through Sunday. Gran said he can’t wait to be a part of his first CPCA championship show and for the action to resume again next year.