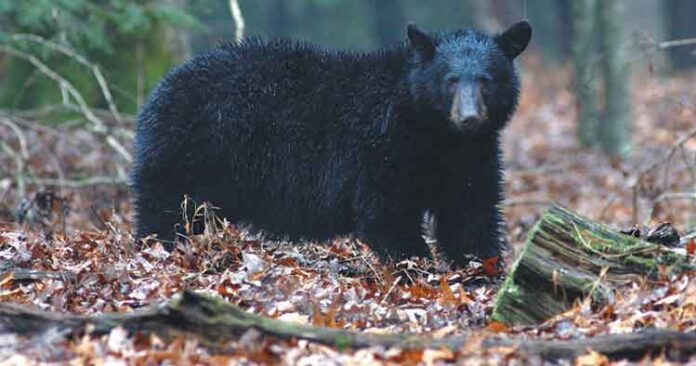 As summer dwindles into fall and winter’s arrival draws ever nearer, food becomes a ‘bear’ necessity throughout Meadow Lake and other parts of the Northwest.

Area residents Herbie and Leona Rowland are on the lookout for a bear (or two) which has been trying to break into their home several times in the past 10 days.

“The first time we noticed him was Sept. 3,” explained Herbie Rowland, who lives about 25 kilometres southeast of Meadow Lake along the Cabana Road. “That day we were going to head to the lake, so I put a couple of bags of garbage just outside the door, but when we were ready to go I noticed one of the bags was missing. I’m sure it was a bear who took it because squirrels surely wouldn’t take it.”

Then, two days later watching through the window from the comfort of their living room around 9 a.m., a bear tried to find its way in.

“First he was over there, then he walks over here and then he went around there and then there’s a racket on this side and he’s tearing at the bottom of our portable air conditioner,” Rowland added.

The Rowlands have had the air conditioner rigged up the past couple of summers to an open window which they close off with Styrofoam.

“I had it all taped up to secure it so to speak,” Rowland said. “That worked good for a few years.”

However, his wife Leona Rowland had reservations.

“I was always nervous about how that was put together,” she said. “Because bears come through our yard all the time.”

Herbie Rowland said there’s so much bush around their home it’s hard to shoot the bear.

“I just can’t get the drop on him,” he said. “I’m smart enough not to open the front door because he’d be gone in a jiffy, so I’ve taken the screens off most of the windows, so if I do see him again, I’ll quietly slide the window open and take a shot from there.”

As a result of these two incidents, a conservation officer was called.

“They came and put a bear trap close to the house,” Rowland noted. “We’ve got it set up where he usually enters the yard, but you know, two days later, on the Sunday, all of a sudden a bear walks up the driveway and he stood there and he looked over at the trap and I could tell he was scared of it. He saw that big bright yellow thing that shouldn’t be there and he looked at it for quite a while. You could see he was very wary and very cautious of it.”

After a few minutes, Rowland said the bear sauntered over toward the house.

“I’m pretty sure he could see me behind the glass,” he continued. “We eyed up each other for a little while and then he turned and headed toward the bush. But just before he went into the bush he stood up once more and looked back at the bear trap and then he was gone. We haven’t seen him since.”

Rowland, as a long-time trapper and hunter, said it usually takes bears a while to really go to sleep.

“We’ll know we’ll be safe when it really freezes outside and there’s lots of snow on the ground,” he said.

“I’ll never be so glad to see winter come,” she said.

Meanwhile, a number of bears have also been spotted in the Goodsoil area this year.

“We have seen bears around here since the spring,” stated Regina Fetsch, a resident of a nearby resort subdivision known as The Shores. “There have been a mother and two cubs wandering around and, one day, she got into one of our daughters’ fridges (located outside her cabin) and made a mess. All kinds of people have kept their fridges outside like this for years and never had this happen. This bear is pretty brave. We have a garden in the back about a quarter-mile from here and she really got into the Saskatoon bushes. In all the years we’ve been here, they’ve never been as ruined as they were this year.”

About a week before that, Fetsch saw a bear across the road from her home.

“We drove right up to it in the truck and it just stayed there eating the Saskatoon berries,” she said. “It wasn’t even afraid. Then, about three days ago, our neighbour called to say a bear got into her yard.”

The Shores is a well-treed area that features both seasonal and permanent homes.

According to Glen Kurjata, a conservation officer with the provincial Ministry of Environment, this has been a year with significant bear calls.

“We receive about two every day, not just in the provincial park but in the farmland area around Meadow Lake, Rapid View and Goodsoil,” Kurjata confirmed. “Meadow Lake has all its traps out, and we’ve also borrowed some from other areas. In total there are six traps deployed right now between Green Lake and Goodsoil.”

Kurjata went on to say the number of bears spotted in and around the area is not uncommon for this time of year.

Kurjata also said the traps have been working.

“A number of bears have been trapped and relocated throughout the summer, two last week alone,” he said. “In the meantime, just be aware bears are out there right now.”