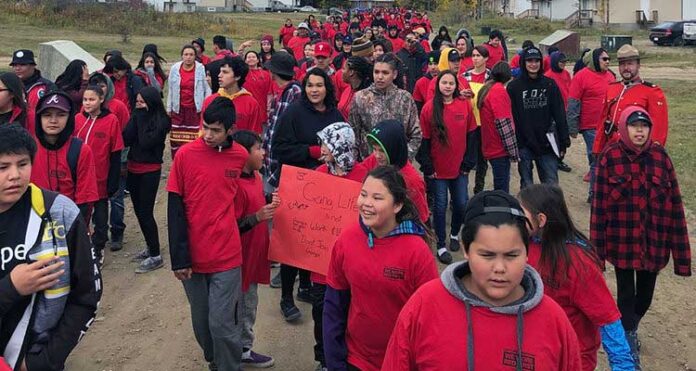 If the people of Loon Lake, Makwa Sahgaiehcan First Nation and the RCMP didn’t already have local gang members seeing red, they certainly do now.

More than 300 people took part in an organized walk throughout the community Tuesday morning (Oct. 1) as a public display against gang violence.

“The idea behind this march came from both the community’s and RCMP’s frustrations over having to deal with gang activity,” explained Sgt. Ryan How, commander of the Loon Lake RCMP detachment. “There is a gang that operates locally and which uses the colour red to intimidate community members. But, the fact of the matter is we’ve all been associated with the colour red a lot longer than this gang has. Red has been a part of the RCMP’s traditional uniform dating back many years, while First Nations leaders have explained the colour red is important to them historically as well.”

That’s why participants in Tuesday’s walk were all garbed in red. How said it was a significant way of taking a stand against gangs and letting them know their days of intimidation will no longer be tolerated.

“We had about 500 red T-shirts made up with different slogans,” he said. “It was such a hugely successful event – there were people from Makwa Sahgaiehcan and Loon Lake, Ministikwan Lake Cree Nation and even Meadow Lake.”

The walk went through the First Nation and down the main street in Loon Lake before finishing up at the local community centre where RCMP members hosted a barbecue.

Among those to take part in the walk was Meadow Lake Tribal Council chief Richard Ben who is from Makwa Sahgaiehcan First Nation.

“It was awesome seeing our youth all join in the walk against gangs and gang violence,” Ben shared via social media following Tuesday’s event. “They are our future and we must do as much as possible to keep our future generations safe. Thank you to chief and council, the Loon Lake RCMP, and MSFN health and school staff for organizing a beautiful event to create awareness. We are stronger together and must let our people know they are not alone.”