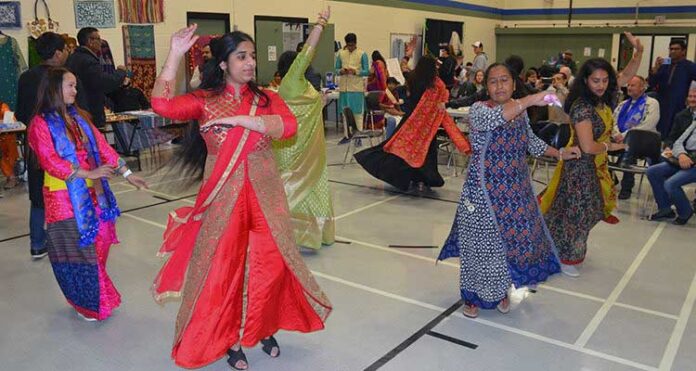 There’s more to Meadow Lake than meets the eye.

This was evident this past weekend when the Meadow Lake and District Chamber of Commerce and North West College joined forces to present Culture Days, an event designed to showcase the various cultural backgrounds of the people who call this community home and to enlighten participants on how diverse Meadow Lake truly is.

“The event went incredibly well,” remarked Miles Nachbaur, business development manager at North West College. “I’m so happy with the turnout we had – about 125 people attended on and off throughout the entire day. Those are really good numbers, especially for a first-time event like this.”

A number of stations were set up in the college gym Sunday (Sept. 29), each one featuring information about a different culture and serving as a means to break down barriers and dismantle stereotypes. Demonstrations were also given throughout the day, allowing those on hand an opportunity to explore the various cultures through dance, food, stories, heritage and more.

“It definitely did a good job of getting the message out there,” Nachbaur continued. “The fact we were able to get eight different cultures to be represented at this event is in itself pretty good considering we didn’t really start organizing things until early September. Next year we hope to make it even bigger and better.”

Sunday’s event at the college was the first of five ‘Culture Share’ events that will be organized by North West College between now and April of next year.

“It’s important to us as a college to do something like this,” Nachbaur said. “There are a number of people from our area who come from diverse backgrounds. This was a way for us to celebrate this diversity with all members of our community. We’re aware there’s a great number of newcomers to our community, so we thought we would help provide an opportunity for these newcomers, as well as local people, to get together and experience different cultures. It’s important to celebrate each other and I believe everyone was very happy with the event. I look forward to what we can accomplish next year.”

Among those to take part in the Culture Days event at the college was Meadow Lake resident Sayontika Das. She is of East Indian descent and, having arrived in Meadow Lake a little more than a year ago, she wanted to share the unique aspects of her culture with others from the community she now calls home.

“I was very happy to be part of the group that represented the local East Indian community,” Das said. “Our group represented four individual countries – India, Bangladesh, Pakistan and Nepal. We had a display showcasing our heritage including religion, the mottos we live by, traditional attire, food and so on. It was very well received by everyone who came by. We also played some of our traditional folk music and encouraged everyone who was in attendance to dance with us.”

Das said the East Indian community was approached by the Chamber to be a part of the weekend’s festivities.

“We were very fortunate to have been asked to be a part of this,” she said. “It also allowed us to learn about and experience cultures different than our own.”

Other cultures showcased at the event included those of Ukraine, First Nations and Métis, the Philippines, Scotland and more.

“Events such as this are important because Canada is a symbol of multiculturalism and social diverseness,” Das noted. “We are able to live together here in harmony, but Culture Days still served as quite an eye-opener and was a very good platform for all of us to display our culture.”

In addition to Sunday’s gathering at the college, Culture Days also included several events throughout the community such as an open mic night at The Eatery Friday evening, print making at Artistic Incidents and a moccasin making workshop at the library Saturday, as well as old-fashioned ice cream making at the local museum and perogy making at the Lions Den also on Saturday.