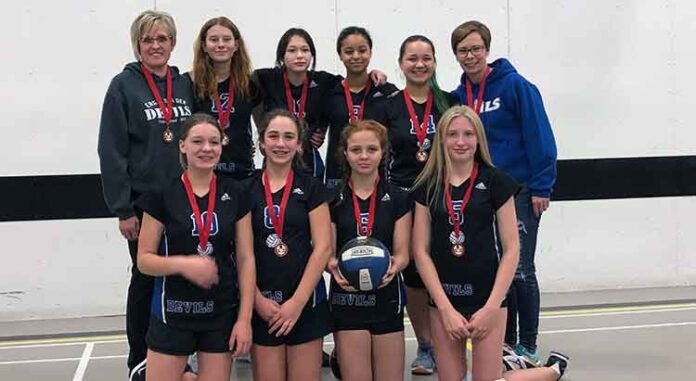 Ernie Studer School’s junior girls volleyball team are on top of the mountain.

“We had a team of eight girls this year – four Grade 9s and four Grade 8s,” explained ESS junior girls volleyball coach Jody Freyman. “The girls played really well throughout the entire tournament, winning their final game in three sets to earn the championship. It was nice to see their hard work throughout the entire season come together for this big moment at the very end.”

The district championships were held Saturday (Oct. 26) in Pierceland and included five teams in total.

“We faced all the other teams – Pierceland, Ile-a-la Crosse, Lashburn and Glaslyn – in pool play, finishing first in the pool which gave us a bye into the final,” Freyman continued. “In the final, we encountered Glaslyn once again. We defeated them 28-26 in the first set, lost 25-17 in the second set, but came back to win 15-13 in the third.”

Freyman said the ability to come back from a tough loss has been a strong point for the team all season.

“When they’re defeated they have the ability to regroup and to come back,” she said. “I was very happy to see them win. Glaslyn has a very strong server who the girls struggled with at first, but come the third set they had found a way to return her serves and to really put that second set loss behind them. They were relaxed in the third, they smiled and they just went out there and played their game. That’s why they were able to win.”

While four of this year’s team members will advance to the senior team at Ernie Studer next school year, Freyman said she looks forward to what the future holds for the junior squad.

“I’m excited,” she said. “Having these four girls move on will definitely mean good things for our senior team, while this year’s Grade 8s will become great leaders for the team next fall.”

Meanwhile, the ESS junior boys volleyball team did not qualify for this year’s district championships, losing out in the playoff round to Pierceland prior to the recent tournament. The boys title was won by the team from Neilburg.

“They (ESS boys) had a very young team, though,” Freyman said. “They only had two Grade 9s and mostly Grades 6 and 7 players.”