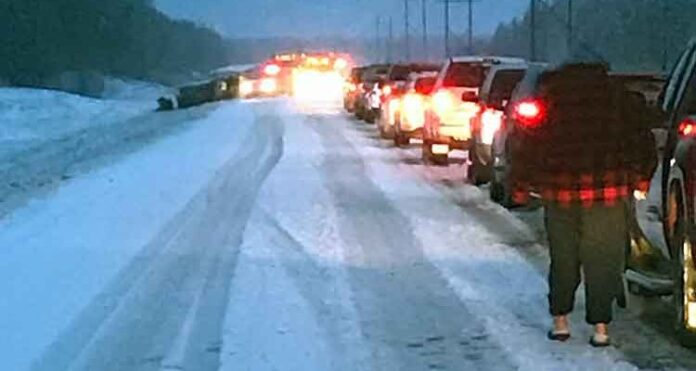 Tragedy struck Meadow Lake and Saskatchewan’s northwest last weekend when three people – including a local EMS worker and two children – were killed in a motor vehicle collision south of Beauval.

On Oct. 25 around 5 p.m., Beauval RCMP responded to the two-vehicle crash which involved an ambulance and a pickup truck about 18 kilometres south of the community on Highway 155.

Road conditions were said to be poor at the time of the collision with slush and ice-covered sections. Alcohol is not considered a factor, but, according to police, the exact cause of the collision should be determined when the RCMP reconstructionist has completed a report and the investigation is fully wrapped up. This, police say, is expected to take a few months.

While the RCMP has not released the names of those involved in the crash, several sources have confirmed the children who died were 12-year-old Jerome Coulineur and one-year-old Kinzey Angeline Iron-Couillonneur. The children, according to reports, were travelling to a family function with Andrew LaRiviere, the grandfather of Iron-Couillonneur and caregiver of Coulineur, as well as Russell Maurice, LaRiviere’s grandson.

According to Beauval mayor Nick Daigneault, all had ties to his community, especially Coulineur.

“He lived in Beauval for a while,” Daigneault said. “His grandmother is from here, but lives in Jans Bay now… We’re doing our part to hold fundraisers to help ease any financial burden on the family, while Jerome’s passing has had a big impact on the kids at the school here. Counsellors are in place to assist anyone who needs help.”

Coulineur’s funeral is scheduled for Oct. 31 at 11 a.m. in his home community of Canoe Lake, while Iron-Couillonneur’s service will take place Saturday (Nov. 2) at 11 a.m. in Jans Bay.

Friday’s collision, meanwhile, resulted in a section of Highway 155 being closed for six to seven hours. It reopened around 1 a.m. Saturday (Oct. 26). Following the incident, the Saskatchewan Health Authority also issued a statement confirming one of its ambulances from Meadow Lake was involved in the crash while responding to a call late Friday afternoon. The nature of the call the EMS workers were responding to, however, remains unknown.

The EMS worker killed in the crash was confirmed by his family to be 28-year-old Leigh Daniel Schroeder, a journeyman electrician as well as a primary care paramedic.

Schroeder’s memorial service is scheduled for Sunday (Nov. 3) at 2 p.m. in Regina. A livestream of the service will be available at www.speersfuneralchapel.com.

Meanwhile, among the first responders to attend the crash scene was Beauval fire chief Jerry Morin. He said road conditions were so poor at the time, no one should have been on the highway unless they had no other choice.

“The road was very treacherous,” Morin said. “On our way to the scene we were fishtailing. The conditions were very bad.”

Morin and other firefighters provided extrication efforts and also assisted with traffic control.

“My recommendation to anyone during weather like this is to stay off the roads, but if you do have to travel slow down,” he added.

In another showing of solidarity, emergency services personnel – including police, firefighters and EMS workers – from Meadow Lake and area took part in a vehicle procession throughout the community Saturday afternoon. The procession served as a tribute to Schroeder, as well as the injured ambulance driver.

“This tragedy is a reminder of the dangers all emergency personnel face on a daily basis in our efforts to serve the public,” noted Meadow Lake RCMP S/Sgt. Tim Sartison. “We are deeply saddened by this loss and our thoughts are with the family and friends who lost loved ones.”