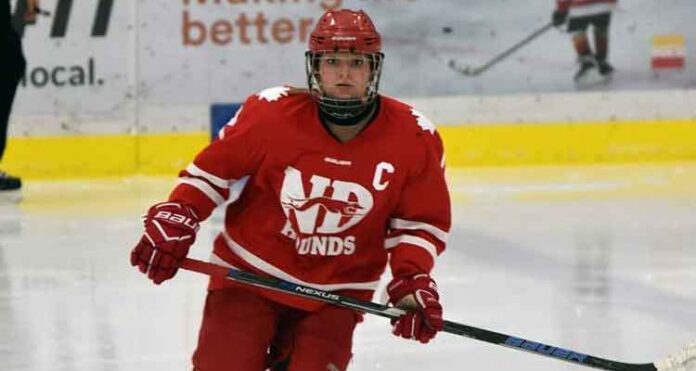 Kendra Zuchotzki, team captain of the Notre Dame Female ‘AAA’ Hounds from Wilcox, SK, served as a member of Team Saskatchewan at this year’s National Women’s U18 Hockey Championships held Nov. 5-9 in Winkler and Morden, MB, helping her squad advance all the way to the finals and a second-place finish overall.

“The tournament featured the top U18 female players from each province,” Zuchotzki explained. “We ended up in second place, but still made history because no Saskatchewan female team has ever earned a medal at this particular event.”

Team Saskatchewan advanced to the final after defeating the Ontario Blue team in the semi-final round. However, up against the Ontario Red squad, Zuchotzki and her teammates had their work cut out for them.

“It was a real end-to-end game,” Zuchotzki said. “They outplayed us in the first period quite a bit, but we battled back. But, by the end, they got ahead and the game ended in Ontario’s favour by a score of 4-2 – the last being an empty net goal.”

In spite of the loss, however, Zuchotzki said it was the biggest hockey game she has ever been a part of. The event was televised nationally and she said the experience of being on the ice for such a big game is something she will never forget.

“The people in the crowd were so loud we had trouble hearing each other on the ice,” she said. “I’ve never experienced anything like that before – it was so cool. The fan support was just amazing.”

Zuchotzki, the daughter of Rodney and Christine Zuchotzki, is currently in her fourth year at Athol Murray College of Notre Dame. The Grade 12 student said the Hounds have had a strong start to the 2019-20 high school hockey season.

“We’ve only had six games so far, but things have been going very well for us,” Zuchotzki, who plays defence, said. “This is my last season at Notre Dame, as I have already committed to the University of Saskatchewan next year where I will play hockey and work toward my bachelor of science.”

According to Craig Perrett, head coach of the ‘AAA’ Female Hounds, Zuchotzki is a true leader both on and off the ice.

“She always leads by example – leadership just oozes out of Kendra,” he said. “She’s just an awesome kid, a very well adjusted person and a heck of a hockey player.”