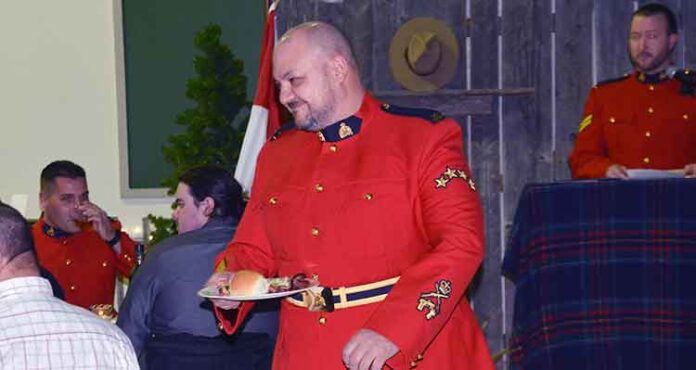 The queen of the ball has a name and that name is tradition.

Held at the Makwa Community Hall Saturday evening (Nov. 16), the Loon Lake RCMP’s Regimental Ball had a full house, attracting RCMP members both past and present, as well as members of the surrounding communities to celebrate the history and tradition of Canada’s national police force.

In addition to the dinner and dance, Saturday evening also included a formal component that highlighted the history of the force, its traditions and an explanation as to why the RCMP does some of the things it has become known for.

“We also had some honoured guests, while prior to the dinner itself a series of toasts were made to the queen, the RCMP, fallen members and to all the members who were in attendance that night,” Lumgair continued.

Funds raised from both a live and silent auction during the event will go toward the purchase of a new barbecue for the seniors’ care home in Loon Lake as well as to Ernie Studer School to help with the acquisition of a buddy bench for the playground.

Lumgair went on to say the Regimental Ball was a first of its kind for Loon Lake, although similar events have been hosted by the Meadow Lake RCMP in years past.

“I don’t know what the regularity is, but various detachments throughout the province and across Canada have held RCMP Regimental Balls over the years,” she said. “It’s a great way to introduce the community to the history of the RCMP. Members who attend always wear their traditional red serge, while the public has a chance to interact with the members and to learn a little more about the RCMP in general.”

Among the special guests in attendance Saturday were representatives from nearby Makwa Sahgaiehcan First Nation, as well as retired RCMP S/Sgt. Doug Zorn who conducted the tribute to fallen RCMP members.

“It was nice to have Doug out and to have him address the crowd,” Lumgair said.

Loon Lake RCMP Sgt. Ryan How echoed this, stating Lumgair put a lot of time and effort in making the idea of a Regimental Ball for the Loon Lake detachment become a reality.

“Shawna proposed this idea last spring and has really been the leader in making it happen,” How noted. “Formal events like this used to be more frequent, but unfortunately seem to have been forgotten lately. Even most of the new members haven’t experienced a community Regimental Ball, so this was a great opportunity for everyone. I’m very pleased to have had leadership from Makwa Sahgaiehcan First Nation attend, as well as retired S/Sgt. Doug Zorn among other distinguished guests. It was a great opportunity for the public to see the traditions of the RCMP on display and for the members to socialize.”