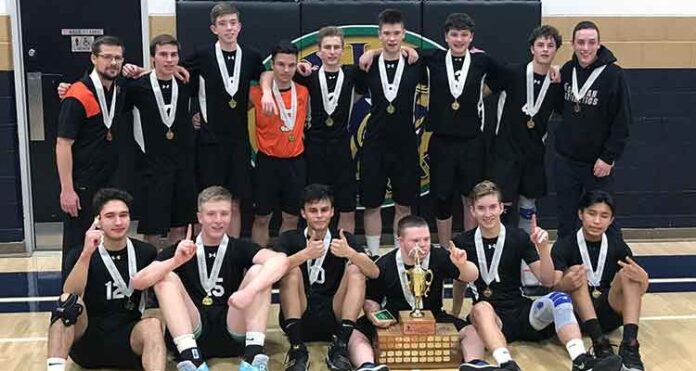 The Spartan boys’ victory at the Saskatchewan High Schools Athletic Association’s (SHSAA) 5A provincial volleyball championships was the first time a boys volleyball team from CHS was able to capture provincial gold since 2007.

“I was in Grade 12 and a member of the team back then,” Dallyn remarked. “Yeah, it seems a bit surreal, but this team deserves to be on top given the amount of time and effort these boys have put in. We finally got over that hump – this is unlike anything else.”

The 5A boys provincials took place in Regina Friday and Saturday (Nov. 15 and 16). CHS was first in its pool, defeating their opponents from Regina’s Leboldus High School, the host school Winston Knoll Collegiate and Saskatoon’s St. Joseph High School.

“We ended up first in our pool, winning all games in two sets with the exception of the St. Joseph High game, which went to three sets,” Dallyn explained. “Come Saturday, we still had one more game in our pool against Swift Current, but we beat them in two straight.”

In a close quarterfinal game, the Spartans defeated Campbell Collegiate from Regina, the latter of which finished fourth in its pool, in two sets by scores of 25-22 and 25-20.

“This put us into the semi-final against Greenall High School from Balgonie,” Dallyn said. “We won that game two straight with scores of 25-22 and 25-19, which gave us a finals berth against St. Mary High School from Prince Albert. St. Mary High has been our main rivals all season long as they had beaten us in every big game we’ve played in all year. We had yet to overcome them in a tournament final, but this time we pulled it off by taking them in two straight by scores of 25-21 and 25-19.”

According to a report appearing in the Prince Albert Daily Herald, the St. Mary Marauders had a tough time bouncing back from a slow start in the final even though the P.A. team had also gone undefeated in pool play.

“They (Spartans) had a couple of big blocks early on and I think our hitters were a little bit tentative after that,” noted St. Mary head coach Rene Quintal. “We came out strong in the second set with some good serves, but we had a little bit of trouble with our blocking and Meadow Lake was able to get into a good rhythm with their offence as a result.”

Dallyn said, in the end, it came down to simply wanting the provincial championship that much more than the other team.

“We worked harder for it and it paid off,” he said. “The boys worked harder on the defensive side than ever before and the offensive side was ready to go. Everyone, top to bottom, played their very best. To see these guys face adversity and keep fighting has been well worth it. Everything has paid off in the form of a provincial championship.”

CHS Grade 11 athlete Jake Willick said the big win at provincials was exciting not only for the team, but also for the many CHS fans in attendance, and those who watched the game live via the Internet

“The team really came together,” he said.

Willick also said he is looking forward to next year and doing it all over again as CHS begins a new quest for a provincial title.

“We’re going to lose a lot of Grade 12 players, but it will be exciting to see where the momentum from this win takes us,” he said.

One of the Grade 12 players who won’t be back next year is Mason Gorski. He said the win at provincials was a great way to cap off his high school volleyball career.

“It was awesome,” he noted. “We hadn’t beat St. Mary High in a big game situation all year, but in this game we also played the best we ever have as a team all year. Everyone was ready and we had their number right from the start.”

Both Gorski and Willick also acknowledged the efforts put in by their coaches and from parents throughout the season.

“We wouldn’t be where we are today without them,” Gorski added.