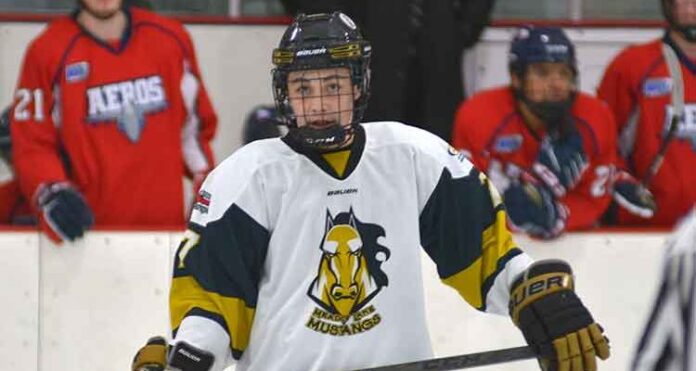 Chase Caron would rather be a Meadow Lake Mustang than play for any other team.

“As soon as I heard about the Mustangs coming to town, I wanted to be one of them,” the 17-year-old forward told Northern Pride.

Caron, the only player on the local Junior ‘A’ squad to have been a part of the roster since its launch at the start of last season, said the reason for his strong level of commitment is simple.

“I really like the coaches, the other players and being part of this team,” he said. “When I first joined the Mustangs I was 16 years old and, because of my age, was really limited when it came to the amount of ice time I would get. Now that I’ve grown as a player and am a little bit older, I’m out there every third shift. I just really love playing for this team and, if I’m going to win, I want to win with this team.”

A big part of Caron’s devotion to a hometown Meadow Lake squad also stems from his family’s strong connection to the sport locally. His grandfather, the late Marcel Caron, was the long-time coach of the Meadow Lake Stampeders, while his uncle, Darren Caron, is both a former Stampeder and a former Meadow Lake Senior Broncos player.

“I’ve been playing hockey since I was four years old,” Caron continued. “I came up through Meadow Lake Minor Hockey and have played all my hockey here in my home community.”

Caron’s commitment to the Mustangs really shined last season when he played in 43 of the team’s 48 games – the most of any player on the roster. During the 2018-19 campaign, he earned five goals and three assists. This season, Caron has competed in 19 games to date – again more than any other players – and has earned one goal and three assists. His single goal this season came during this past Saturday’s (Dec. 7) 11-2 loss at home to the Edson Aeros.

“I’m not really sure where I will end up as far as hockey goes, but for now I’m going to keep going with the Mustangs as best I can,” Caron added.

One place Caron and his fellow Mustangs won’t end up, at least not this year, is Las Vegas. While it was recently reported the Mustangs would be travelling to Sin City later this month to once again participate in the annual Western States Hockey League (WSHL) Showcase, this is no longer the case.

“Last year, it was a lot of fun going to Vegas, to compete there and in front of the scouts was such a great experience,” Caron said. “It sucks we’re not going this year, but the team owners were hesitant to pay our way when it’s a $30,000 trip and we’ve been sometimes having trouble getting more than eight guys to travel to an away game.”

Currently, the Mustangs are ranked third in the WSHL’s Provincial Division standings with a record of 7-12.