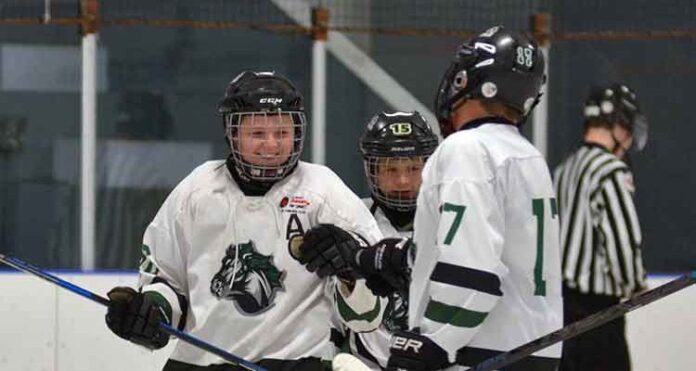 It’s been an unbelievable season so far for the Meadow Lake Bantam Stampeders.

Heading into this weekend’s away game against the combined Debden-Big River squad, the Stamps boast an undefeated 13-0 record, something head coach Darren Caron attributes to the hard work and determination of every player on the roster.

“The kids have been working very well together this season,” Caron stated. “Every single one of them has been improving since the start of the year. Assistant coach Blaine Fiddler and I think alike and we’re both very pleased the team has followed the route we’ve laid out for them.”

The Stampeders’ most recent wins came this past weekend when they defeated their opponents from Pierceland 14-5 and Lashburn 9-6.

“A lot of the team’s continued success could have to do with the momentum they had coming off last year’s provincial run,” Caron continued.

While last season there were two Meadow Lake Bantam teams because numbers were so high, a combination of the two vied for the top spot at provincials and came very close to winning it all. The team lost out by only one or two points in the final game of the two-game, total-point series. Since then, Fiddler said, some of those players have returned to the ranks this year while newcomers have been eager to prove they have what it takes to make things happen on the ice.

“Our players have much more confidence going forward and some really great team chemistry,” Fiddler added.

“We have some new faces this year who have definitely helped make a huge difference,” he said. “Yes, we did have a few key players leave us since last season, but I believe we’re still strong enough to get the job done, mainly because we have guys who want to put in the work.”

One job the team would like to “get done” this season includes winning that elusive provincial championship. Although exact dates have yet to be determined, the Stampeders do know they will be meeting the Rosetown Redwings in the opening round of what is now a best-of-three series.

“It’s a new format the Saskatchewan Hockey Association (SHA) is going with,” Caron said. “It’s a best-of-three series, but because the towns where these teams are from are so far apart, if it goes to Game 3, that game will be played as a short, 10-minute game following Game 2. It’s sort of like overtime, but won’t be sudden death. I like this new format a lot.”

As for league play, Caron also believes his team has what it takes to go all the way to a STEP League championship.

“There’s only one team we haven’t met yet this season – the North Battleford 1 team,” he noted. “They’ve only lost a couple of games, but we did have a chance to see them in action prior to one of our earlier games this season and they were impressive. I believe all the teams in this league are getting better as the season goes on, so we will have to be prepared for anything.”

“We have a really good chance at taking the STEP League championship this year,” he said.

The Stampeders are scheduled to face the North Battleford 1 team at home Jan. 26. Meanwhile, Caron said he is eagerly looking forward to this weekend’s contest against Big River-Debden.

“We beat them 11-7 when we played them earlier in the season, but they too are improving as time goes by,” he said.