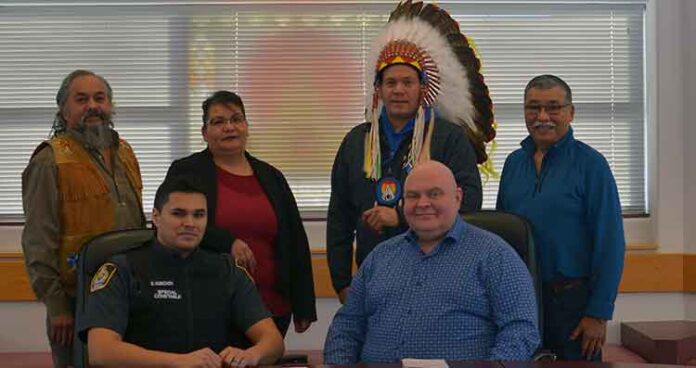 Delbert Aubichon is ready to lay down the law.

“Part of the reason I applied for this position is because I worked security for about five years in Fort McMurray and had a really good idea of the reporting system, as well as some idea of the law,” Aubichon told Northern Pride. “I also worked as an emergency dispatch there, so all of that kind of fell hand-in-hand with what they wanted to accomplish at Flying Dust. Another reason I wanted to come back is it’s important to me to be with my family and kids, who are here.”

Aubichon began his CSO training last spring and, up until being sworn in this week, served as justice coordinator at Flying Dust.

“I’m a little bit nervous to know I’m the first active CSO on a First Nation in Saskatchewan, but I want to be a positive role model and help open up similar opportunities for other First Nations,” he added.

As far as the community goes, Aubichon said he also wants to create awareness as to what his job entails. In a recent Facebook post, he outlined what the public can come to expect with him now that he’s on the job.
“I am letting all my friends, family and community members know all stops made by me will be video and audio recorded,” he noted. “Keep in mind, I will not be able to grant any favouritism while executing my lawful duties.”

Also in attendance for the swearing-in ceremony was Gavin Nash, director of policing innovation with the provincial Ministry of Corrections and Policing.

“This is a great moment for the province and the CSO program,” Nash said. “We’ve been working with Flying Dust for two years to get this program up and running.”

Nash went on to describe Aubichon’s role and responsibilities further, noting his special constable appointment authorizes Aubichon to enforce provincial statutes including The Traffic Safety Act, Alcohol and Gaming Regulations Act and so on.

“So, if it comes to the point where he has to give a ticket, he can do so for speeding, seat belts, having open liquor – a variety of things,” Nash stated. “Delbert also has two jurisdictions. His primary jurisdiction is Flying Dust, while his secondary jurisdiction – if the RCMP needs him to assist with a file outside of Flying Dust – is the Province of Saskatchewan, but only when called on by the police.”