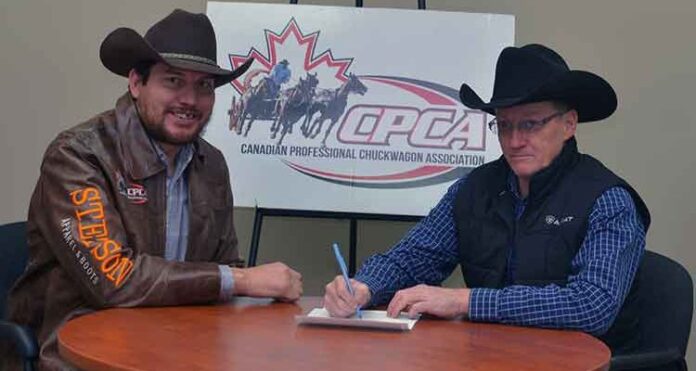 The countdown is on for the 100th anniversary of the Meadow Lake Stampede and organizers are pleased to announce the ever-popular chuckwagon races will be part of the 2020 show.

For the first time in 20 years, Stampede Week, which runs from June 1-8 this year, will feature three full days of heart-pounding action of the Canadian Professional Chuckwagon Association (CPCA) drivers and outriders as part of the week-long festivities. From 2001-2017 the local Lions Club was the sponsoring group that looked after bringing the chuckwagons to town on a different weekend other than rodeo weekend.

“It took us a while to decide, but we are thrilled to inform chuckwagon racing fans everywhere the Meadow Lake Stampede Association, in partnership with Flying Dust First Nation, will be bringing the chucks back to Meadow Lake for our 100th anniversary year,” stated Stampede president Leighton Wood. “For the last five years, our group has been asking community members what they would like to see as part of the 100th anniversary and nearly all the answers were the same: ‘try and make it what it used to be – rodeo and chuckwagons on the same weekend.’”

CPCA wagon driver and executive member DJ King met with Stampede Association members on three occasions the past few months looking to lock up the one vacant weekend for the organization.

“I’m happy,” he said. “I’m very happy we now have a full schedule of race meets this year. Meadow Lake has a lot of chuckwagon history, and on our circuit more than half our drivers come from the Meadow Lake area.”

The Meadow Lake races will be called the ‘Percy Derocher Memorial Chuckwagon Derby’. Derocher was a long-time, avid supporter of chuckwagon races who passed away last fall.

“We were approached by the Stampede Association to be part of their 100th anniversary celebration, and because many of us can remember what a good thing it was for the two communities in years past, we as a council decided to jump on board,” said Flying Dust chief Jeremy Norman. “For them to honour one of our past chiefs and community leaders (Derocher) in this way is something we are very pleased to be a part of.”

Wood noted an event of this magnitude requires commitment from not only the business community, but from everyone.

“We have already had a few sponsors come forward, but more will definitely be needed – it’s a big ask as many already contribute financially to our rodeo,” he added. “We’ll also be looking for more volunteers.”

Wood has been involved with the Stampede Association for about 30 years and has witnessed how the community has supported the annual bullarama and indoor rodeo to make it a success year after year.

“This is a great community,” he said. “I’m confident in our group, our business community and those who will support through their attendance. Together we will make the 100th anniversary of the Stampede a great event we can all be proud of.”

Temporary seating will be brought in for the races.