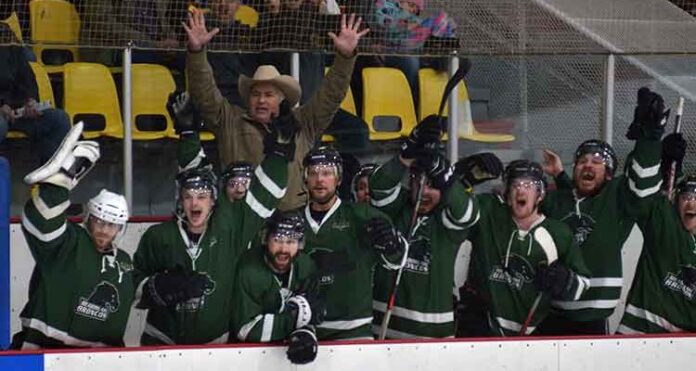 The Meadow Lake Senior Broncos will be at full force when they compete in Saskatchewan Hockey Association (SHA) provincials starting this weekend.

Broncos head coach Winston Morin was surprised goalie Jared Lafond is able to be back between the pipes in time for the team’s provincial ‘A’ series against the Watrous Winterhawks after an off-ice injury caused Lafond to miss a handful of league games earlier this month. Lafond was named to the Broncos’ provincial roster in January alongside fellow goalie and former Meadow Lake Stampeder Travis Harrington, but the former’s ability to actually take part came into question.

“Lafond broke his jaw recently and actually required surgery,” Morin explained. “But I guess modern medicine works a lot better these days because his doctor released him to start playing again as recently as this past weekend.”

Lafond returned for part of Game 4 in the Meadow Lake Broncos-Dewberry Mustangs SaskAlta Hockey League playoff series Saturday and was back in net for all of Sunday’s Game 5.

“He’s got a plate in there (in his jaw), which I guess makes him good to go,” Morin continued. “It works out well for us because it means we have our original provincial lineup back. We’ll just keep going forward from here and see what happens.”

If Lafond had been unable to return, Harrington would have been the starter for the provincial run against Watrous while veteran goalie Rick Dallyn likely would have been recruited to serve as backup.

Meanwhile, another Bronco player back in action sooner than expected is defenceman Jordan Oystrick. He was taken out early in Game 1 between the Broncos and Dewberry after suffering a dislocated thumb. While Morin expected Oystrick to be out for a couple of weeks, he also returned this past weekend and will be part of the upcoming provincial series.

“He played well on the weekend and said he’s feeling pretty good,” Morin added. “We have extra defencemen, though, so either way we are going to be ready to roll come provincials.”

The best-of-three Broncos-Winterhawks provincial series gets underway this Sunday (Feb. 16) at the Meadow Lake and District Arena. Game 2 is scheduled for Watrous Feb. 23, while Game 3, if necessary, will be back in Meadow Lake March 1 at 5 p.m.

“Hopefully the schedule works out so it won’t interfere too much with our league playoff schedule (vs Hillmond),” Morin said. “It can get to be a little much when you end up playing so many games in a row, so hopefully it won’t be as intense as it was last year.”

Last year, the Broncos were eliminated from provincials after dropping Game 3 of their best-of-three, second-round series to the Naicam Vikings.