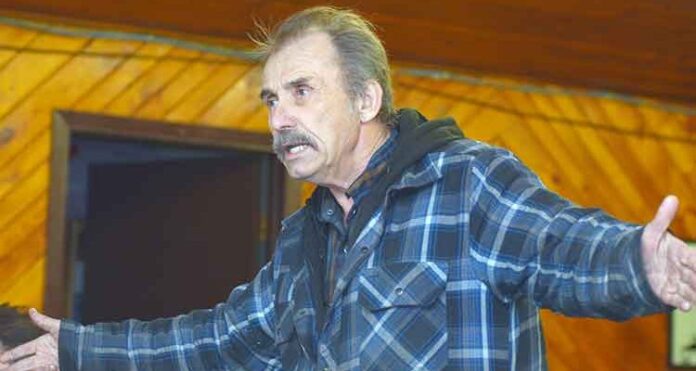 It’s time to change the rules.

That was the key message shared during a special meeting held Saturday (Feb. 8) at the Buffalo Narrows Friendship Centre where close to 65 people gathered to discuss issues currently facing northern Saskatchewan, as well as the beginnings of a coalition to stand up for the rights of northern people. The meeting was organized by Athabasca NDP MLA Buckley Belanger.

“Today is a very important day,” Belanger told those in attendance. “As northerners – Dene, Cree, Métis and non-Indigenous – we need to look at how we can collectively begin to work together because the amount of disrespect afforded to northern people is getting worse and worse. We see it happening time and time again. Trappers’ rights are being trampled, we’ve lost our term supply licence for forestry to a company out of B.C., and I understand a cabin was hauled away from Pinehouse yesterday (Feb. 7) on a flatbed truck… The North has got to get together. We have no choice. If you look at all the communities in our region, who is winning? The First Nations are not winning, the Métis communities are not winning, Buffalo Narrows is not winning, La Loche is not winning, and why is it we’re all not winning this fight? It’s because we aren’t getting together to stand up for what I feel is truly important and that is the North being respected and the northern people being respected on a lot of these decisions affecting our land.”

The meeting included a panel discussion, as well as an opportunity for the audience to share concerns and ask questions. Among those on hand was Dr. Greg Finnegan, CEO of Policy North, an applied research group associated with Northern Studies and Indigenous Governance at the University of Saskatchewan. At Policy North, Finnegan is tasked with building a business environment that can respond to the needs of northern communities for business and governance solutions that can build resilient communities. He was invited to Saturday’s meeting by Belanger.

“There were a lot of wonderful speakers and I know the solution to economic change is there if they want to make it happen,” Finnegan told Northern Pride. “I was impressed by how articulate the group was. They were very impassioned and they certainly recognize change is needed.”

Belanger, meanwhile, also noted the commercial fishing industry is another aspect of the North not getting a fair shake from the current government.

Belanger went on to say all these resources are on northern land.

“The North needs to take a step forward and say this is our land, these are our traditional resources, our traditional area,” he continued. “Why are we having trouble building cabins? Why can’t we go trapping? Why can’t we commercial fish? Why can’t we do all these things? Why do we have to follow all these rules set aside for us? Rules that don’t allow us to win. For too long we’ve been losing this battle and we’re not going to lose it forever. That’s why we need to do two things today. Firstly, we need to make sure we all participate and, secondly, we need to set up a coalition. That’s the objective today – setting up a coalition of Dene leaders, of Cree leaders, Métis leaders, First Nations leaders and community leaders – Indigenous or not. We need to be able to speak up together and start fighting back.”

In a subsequent interview, Belanger reiterated some of the comments he made during the meeting.

“Things are going to be done differently in northern Saskatchewan,” he said. “People are going to get organized and we’re going to demand industry in our own backyard because for too many years we’ve been following the rules set by others and has that benefited the North? Absolutely not. When others make the rules we are forced to follow, we lose. We need to change the rules and that’s exactly what we hope to do today.”

According to Finnegan, however, this change is not something likely to happen overnight.

“This wasn’t the type of meeting where you have a group of people come together who are in a position to make these kinds of decisions and to drive them forward,” he said. “I believe that will be the next stage. This was a first step in getting people together from different communities who share similar concerns and to have a concentrated, organized group ready to take things to the next level.”