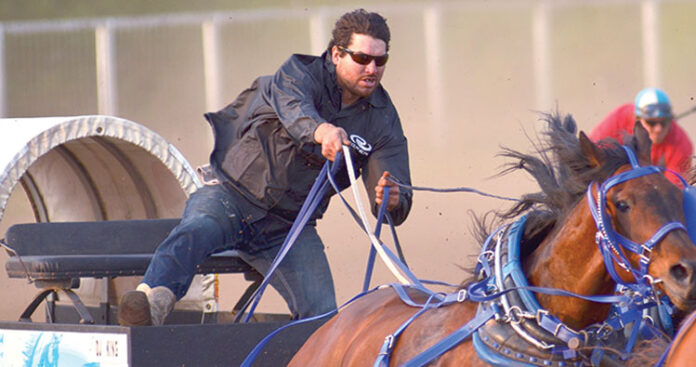 From the National Hockey League to the Calgary Stampede, Meadow Lake’s DJ King has cemented his legacy in two professional sports.

The former St. Louis Blue and Washington Capital was recently named as one of two demo drivers for the 2020 Calgary Stampede this July. King, who for the past six years has continued to improve in the Canadian Professional Chuckwagon Association (CPCA) standings, said this is the next step toward achieving his ultimate goal of one day officially competing at the big show in Calgary.

“It’s exciting news for sure,” King told Northern Pride. “This gets me that much closer to racing in the Calgary Stampede and, hopefully, to some day winning it. I’m very excited and honoured to have been invited to Calgary this year as a demo driver.”

Also invited to be a demo driver this year is Wade Salmond of the World Professional Chuckwagon Association (WPCA). A demo driver’s role is just as the name suggests, to provide a demonstration run prior to each night of racing at the Stampede. Last year’s demo drivers – Lane Tournier and Dale Mitsuing – were both invited to compete at this year’s event, and King is hopeful this will prove to be the case for him as well.

“It’s often served as a stepping stone to Calgary,” he said. “I hope to be there racing next year. When I joined the CPCA six years ago, I had a five-year plan of making it to the Stampede. Sometimes goals take a little longer than expected, but they’re always worth waiting for.”

As for the criteria involved with selecting demo drivers each year, King said any number of things could be taken into account.

“They have different things they’re looking for, but the biggest thing for me is I ran fairly clean last year and was very safe,” he noted. “I’ve also done as much as I can to promote the sport. Chuckwagon racing could be a dying sport if we don’t stick with it and encourage more young people to become involved. I also think they look at who they feel has a good chance of eventually coming to Calgary as a competitor and who they think has a strong future in the sport.”

“I was aiming for the top 10, but I have seen improvement every year and will continue to improve over time,” he said. “But, I wouldn’t be where I am today without the support of my family, my barn crew and my sponsors. None of this would be happening without those three components, that’s for sure.”

This year’s Calgary Stampede runs from July 3-12. The 2020 CPCA season gets underway in Prince Albert May 29-31 with the Meadow Lake show the following weekend, June 6-8.