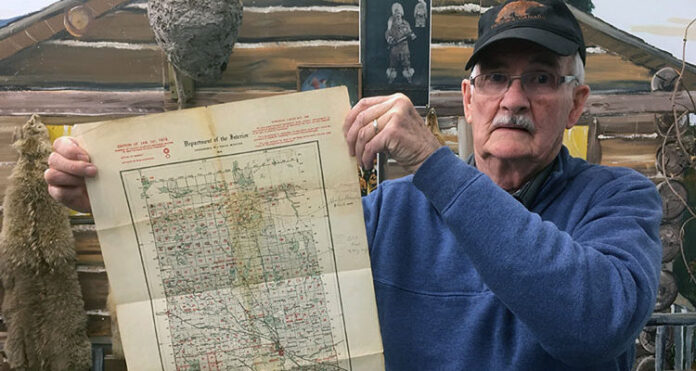 It’s amazing what one can find in a museum… or, in this case, in the mail.

Recently, Meadow Lake and District Museum members were surprised when a more than 100-year-old map of the region arrived from, of all places, the United Kingdom. The map, which is dated from 1914, also has some hand-written notes scribbled to one side indicating an area just north of Flying Dust reserve where the original owner of the chart pinpointed his intended homestead, as well as a homestead that, at the time, belonged to his uncle. The identities of these individuals, however, remain unknown.

“We don’t know who for sure this would have been, but it’s from a long time ago anyway,” stated museum president Jack Moffet.

According to Howard Brown, the map simply arrived in the mail a few weeks ago.

“From what I understand it came from someone in England,” Brown said. “Somehow this person found the information they needed in order to send it to us. It just sort of fell out of the sky. It’s such an incredible story.”

Brown went on to say the museum is still working on determining exactly who the individual is who forwarded the map, as well as gathering any historical information it possibly can about whoever may have owned the properties in question back in 1914 or since.

“We always try our very best to validate any information we receive, but – as long as there is nothing to contradict it – we often have to go with however much of the story we can get,” he said. “This map just sort of fell in our lap and, as far as I know, we haven’t been able to identify the homesteader yet. We have no reason to doubt the map’s veracity. Apparently it was found amongst some materials belonging to an ancestor or antecedent of some kind to this person in England, and he made the effort to track us down. It’s a most remarkable situation because this person could have very well thrown the map away thinking Meadow Lake has nothing to do with where he lives.”

Northern Pride, meanwhile, was able to connect with the people who donated the map to the local museum. Their names are Steve and Vi Sherring and they live in a small village in southwest Shropshire, England.

“We found the map in a second-hand book amongst other items purchased at a local auction about 40 years ago – probably at Craven Arms in Shropshire,” Steve Sherring explained. “It reappeared when we packed up to move last year, which was a move of all two miles. Naturally we Googled Meadow Lake, read the information recorded by the museum and it piqued our curiosity. Who owned the homesteads, both uncle and nephew? And, did they have a connection locally? Shropshire is a mainly rural county on the Welsh borders, hill farms, Offa’s Dyke and Norman Castles. It was probably the right breeding place for pioneers.”

Sherring concluded by stating, if the museum is able to connect a name with the homesteads in question, he would be willing to conduct research in his area to help determine any local connections.

Moffet is also hopeful someone will step forward and provide some more information.

“It’s a real prize to us,” he said. “It’s very old, and now we have it in a frame and hanging on the wall… If there is anyone here or in England who sees this story and recognizes the map, please let us know here at the museum and we’ll follow up on it.”