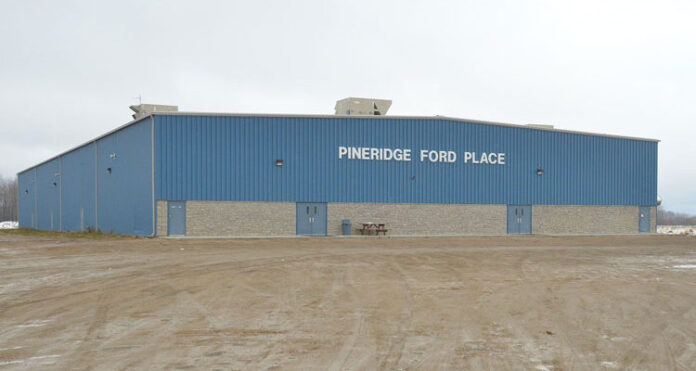 Plans to keep the ice in place at PineRidge Ford Place on Flying Dust First Nation following the 2019-20 hockey season have been iced… at least for the time being.

“If everything had gone as planned, there was a lot of things planned for the ice during the summer months – youth tournaments, senior rec. tournaments, a spring program and more,” remarked Jon Mirasty, Flying Dust’s recreation director and youth mentor. “As a hockey player, not having access to ice year-round was something I struggled with when I was younger. A concept such as this came about 15 years too late for me, but would have been great for today’s youth including people like my son, Triston.”

The younger Mirasty is a member of the Western States Hockey League’s Fresno Monsters and, until the premature cancellation of the hockey season, was poised to accomplish even greater things alongside his teammates.

“His team was first in the league heading into playoffs when the season was cancelled,” Jon Mirasty stated. “After that, because he’s been living in California, he found himself stranded there for a bit. We finally got him back home, but he has to be in self-isolation for 14 days because, as part of his commute home, he passed through Seattle (Washington) which, to my understanding, is one of the top infected cities in the U.S.”

According to Clay Debray, arena manager, the ice will remain in place for the time being, even though no one will actually be using it for the foreseeable future.

“Yes, everything is on hold for the time being, but we’re looking toward the most positive outcome this will all blow over soon enough and everyone can get back to their everyday lives,” Debray said. “A decision will have to be made whether or not the ice will stay in or not, but with the success we’ve been having at the (Snipe and Celly) pro shop, it should be enough to compensate to keep the ice in place for now. We’re very optimistic we will soon see kids skating here again.”

Other plans for the ice this spring and summer included a goalie school, athlete training and testing, and more.

Meanwhile, Mirasty said the plan to keep the ice in at the Flying Dust rink all year long would have allowed the band to offer something different to people from the Flying Dust community.

“I hope some of this programming can go ahead as planned before too long,” he said. “It’s a situation we’re all taking day-by-day. Our office (Flying Dust band office) is shut down, while I have been trying to do some things with the horses to help keep the youth occupied, but, of course, in limited numbers.”

Mirasty went on to say meetings are held twice a week to determine next steps in the wake of COVID-19 updates.

“I’m optimistic,” he said. “I know quite a few people throughout the world and many of them are saying things are already starting to get better for them. We sort of got caught near the end of all this, so its going to take a little longer for us. People just need to remain patient, respect what they’re being asked to do and allow the professionals to do what they need to do.”