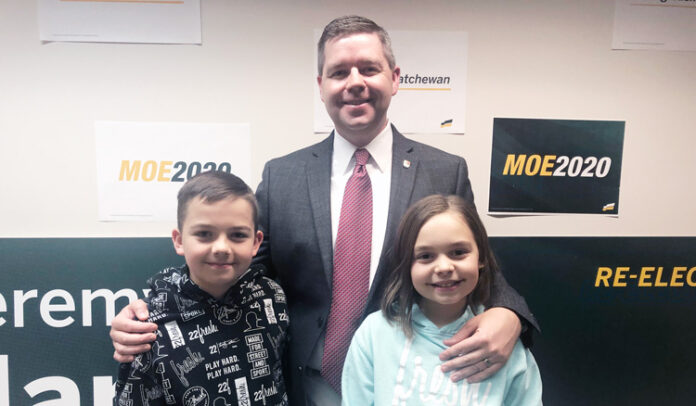 Jeremy Harrison is ready to get back to business at the Saskatchewan Legislature.

While final numbers were not available by press time, Harrison was declared the winner shortly after 8:30 p.m. With 42 of the 56 polls reported, Harrison had secured 1,762 votes (64 per cent) to King’s 924 (33 per cent) and Vandale’s 82 (three per cent). His victory was also announced minutes after various news outlets declared Premier Scott Moe and the Sask. Party victorious in their efforts to form a majority government for the fourth consecutive time.

“I want to thank the voters of Meadow Lake,” Harrison said. “It’s a great honour to have been their representative for the past 13 years in Regina, in the Legislature. It is a huge honour to be re-elected for now a fourth term, and I just want to thank, from the bottom of my heart, the voters of this constituency who I have had the chance to get to know so well. I’ve lived here all my life, but had the chance to get to know them again through the course of the campaign.”

“They did a wonderful job as always,” he added. “Six times we have done these general elections – both federal and provincial – and we have a great team that has been with us through all of that.”

Election Night itself, meanwhile, was vastly different than usual, with Harrison speaking candidly with the press from his campaign headquarters on Centre Street opposed to making a formal speech amidst a large gathering of his supporters.

“Usually we have Election Nights in a sort of big venue, but now we’re here,” Harrison said. “Tomorrow, however, we’ll be getting back to work. We’ll be back at it making sure we have a strong economic recovery through COVID-19, as we’ve been seeing over the course of the past several months.”

Harrison went on to say COVID-19 will remain one of if not the major focus of the government going forward.

“I’ll be in touch with senior officials from my ministries – you can continue as a minister during a campaign but obviously you’re not managing your ministries in the same sort of way when you’re not in an election campaign,” he said. “So, we’re going to be back at work in that context tomorrow and making sure we’re putting in place policies, making decisions that are going to ensure we continue to have the strongest economic recovery from COVID-19 in the entire country.”

Harrison was elected to Parliament in 2004, and at the age of 26 became one of the youngest Canadians ever to sit in the House of Commons. He was first elected to the Saskatchewan Legislature in 2007. He is the youngest Canadian ever to have been elected to both the House of Commons and a provincial Legislative Assembly. Harrison also serves as the provincial minister of trade and export development, as well as minister of immigration and career training.

Meanwhile, although a winner in the Athabasca riding had yet to be announced by press time, incumbent NDP MLA Buckley Belanger was leading with 495 votes (55 per cent) over the Sask. Party’s Kelly Kwan who had 339 (37 per cent) and the Green Party’s Leroy Laliberte who had 71 votes (eight per cent) with only 15 of 39 polls reported.

And, in the Cumberland constituency – with 30 of the 54 polls reported – incumbent NDP MLA Doyle Vermette was leading by 1,023 votes (60 per cent) to the Sask. Party’s Darren Deschambeault who had 627 votes (37 per cent) and the Green Party’s Aaron Oochoo who had 56 votes (three per cent).

For the full story, see this Thursday’s (Oct. 29) edition of Northern Pride.