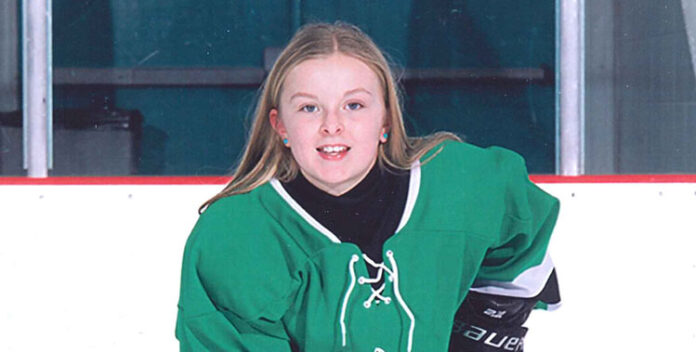 Twelve-year-old Maicy Groenewegen of Meadow Lake is ready to take a bite out of the competition this hockey season.

Groenewegen was recently recruited to the U15 ‘AA’ Northwest Sharks of the Saskatchewan Female Hockey League and, even though she’s much younger than the other players on the team, said she is ready for what lies ahead.

“I’m excited to play U15 ‘AA’ with the older girls as it’s going to be a challenge for me playing advanced hockey,” Groenewegen said. “I was a bit nervous going into tryouts, but since making the team I don’t really find it intimidating playing with the U15 ‘AA’ girls. They have all been really nice and have welcomed me.”

According to Groenewegen’s father, Burton, Maicy came up through the Meadow Lake Minor Hockey system where she often played on boys teams because, at least when it came to her age group, there weren’t enough players to ice a full girls team.
“Last year, she played at the Peewee level in the North East Alberta Hockey League (NEAHL),” he said. “However, this year, because of COVID-19 and the fact teams cannot cross the border from one province to the next, Meadow Lake Minor Hockey cannot put a team in that league.”

Maicy Groenewegen, meanwhile, played spring hockey with a girls team out of Saskatoon. Through connections made with this group, she was invited to try out for the Sharks and was successful.

“She’s only 12 years old, so she’s underage (in terms of the level she is playing at) but, when it comes to girls hockey and the players who are really serious about the sport, there comes a time when they have to consider making a switch because there just isn’t enough for them to play at that level here at home,” Burton Groenewegen added. “In this case, she didn’t really have much to lose.”

‘AA’ hockey works as a sort of feeder system to the ‘AAA’ level and possibly, down the road, to college or university play. That’s what the Groenewegens are hoping for, but, in the meantime, Maicy Groenewegen said she is simply happy to have somewhere to play the sport she loves.

“I’m excited to learn new skills that hopefully soon I can apply in a game,” she said. “There is a lot I like about hockey – I have made some really good friends, it’s challenging, and I really just like to play the game. Last year I was the only girl on the NEAHL team. The boys have always included me and have made me a better player cause they push me to play a quick game. I’m looking forward to a great season once COVID goes away.”

As for COVID-19, strict guidelines brought about by the pandemic made for an interesting experience during ‘AA’ tryouts in early September.

“At that time, because things are operated under the Battlefords Minor Hockey Association and its rules, no one was allowed in the arena except for players, coaches and staff… That meant we couldn’t watch the tryout, but we were able to view an inter-squad game via Facebook Live,” Burton Groenewegen said. “Now they are allowing one parent in to watch – practices are about two to three times a week.”

While it remains uncertain what shape the season will eventually take in terms of games and scheduling, Burton Groenewegen said he is proud of his daughter and her accomplishments.

“It’s a testament to Meadow Lake Minor Hockey, as well as the coaching she has had over the years and her skating ability,” he said. “Girls hockey isn’t always in the limelight as much as boys hockey because there is no end potential like the NHL for girls. For her to make it this far at such a young age, though, is exciting, and we’re looking forward to where things go for her from here.”

Also on the ‘AA’ Sharks roster this year is Bree Martell, a member of the Meadow Lake Bantam Stampeders last season.
“I coached Bree in both Peewee and Bantam,” remarked Darren Caron. “She’s both a great kid and a great hockey player. She listened very well, followed instructions and wasn’t afraid to learn new things.”

Caron also said Martell wasn’t intimidated to play against the boys one bit.

“Playing contact I was a little worried, but she proved me wrong,” he added. “But, as it turned out, she wasn’t scared to give or take body-checks, and there wasn’t a spot on the ice she hesitated to go… I am very happy for her to be advancing in her hockey and look forward to following her career.”