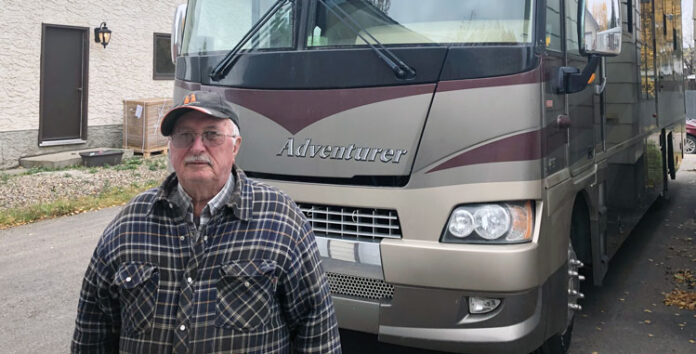 As Canada geese continue to fly south for the winter, more than a few snowbirds have opted to stay right here in Meadow Lake.

That’s because the COVID-19 pandemic is preventing Canadians from frequenting their winter homes south of the border this year. Among them is Meadow Lake’s Ray Miller who, along with his wife, Marcella, owns a park model RV just east of Phoenix, Arizona.

“We have been spending our winters in Arizona since 2004,” Miller said. “We own a 400-square-foot trailer – it’s like an RV meaning it has wheels and could be moved if need be, but we keep it at the park year-round and drive down every winter. For the first few years we would go after Christmas and come back in April. More recently we have been going down earlier in December. Unfortunately, it doesn’t look as though we will make it there this year.”

The Canada-U.S. border was closed to non-essential travellers earlier this year in response to the pandemic. And, although there has been some rumblings the border could reopen sooner rather than later, Miller said he does not object to having to spend the winter in Meadow Lake if he has no other choice.

“We’ve spent our fair share of winters in Saskatchewan too, so we know what we’re in store for,” he said. “It won’t be a problem because we can enjoy our time here at home too. Hopefully the border will open up by Christmas and we can still get down there. If not, maybe I can take in some hockey games unless that is still up in the air too. I’ll probably also do some curling. Normally I curl up until we head south anyway, so there’s that option. I might also do some ice fishing. There’s no shortage of things to do with our time.”

Miller did say he will miss his friends in Arizona, however.

“I’m sure our place will be safe – it’s in a gated community, there are people who work there full-time and I’m sure the American travellers will still be there this winter,” he said. “There are also about six families from Meadow Lake that have places there – we get together with them to play softball and golf. We’ll miss doing that, but the good thing is we’ll all still be in Meadow Lake this winter.”

Another Meadow Lake couple that heads south to Arizona during the winter months are Dale and Barbara Sutherland. They own a motor home and, for the past 18 years, have driven to and from the Grand Canyon State.

“The border is still closed, so we couldn’t go down there even if we wanted to,” Dale Sutherland reiterated. “Either way, because of COVID-19, we wouldn’t be going this year considering the way things have been going in the U.S.”
While the Sutherlands have stayed at an RV park for the last several years, when they first began their southward trek they would often camp in the desert.

“This year we’ll be staying at home – It isn’t only about the concerns we have for our safety, but simply for the fact there’s nowhere to go,” Sutherland said. “We’ll probably just watch a lot of TV or do a lot of reading.”

Sutherland also said he’s optimistic he and his wife will be able to return to Arizona next winter.

“I hope so,” he said. “I hope the virus will either pass by or they’ll have a vaccine.”