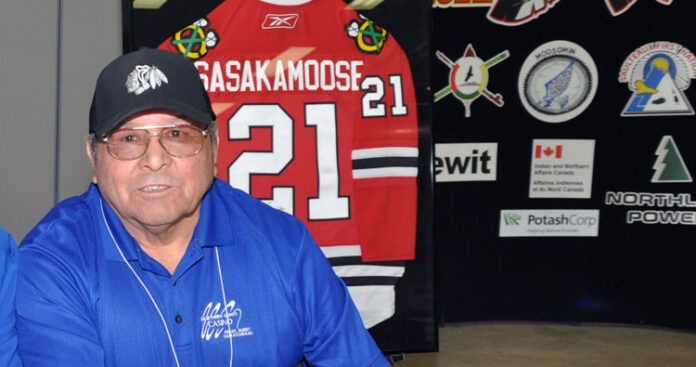 A legend in the world of hockey and an inspiration to countless people throughout Canada and the world has died.

Fred Sasakamoose, the first Treaty Indian to compete in the National Hockey League, died Tuesday from complications related to COVID-19. He was 86.

“I was definitely saddened to hear the news,” remarked Meadow Lake resident Lawrence Dubray, a former teammate of Mr. Sasakamoose when the two played for the Meadow Lake Senior Stampeders in the early 1960s.

Mr. Sasakamoose, originally from the Ahtahkakoop Cree Nation near Shell Lake, achieved the dream of every young hockey player when he was signed to the NHL in 1953, playing 11 games with the Chicago Blackhawks. Prior to this history-making moment, Mr. Sasakamoose attended the Blackhawks’ training camp in Welland, ON while still a member of the Western Canada Junior Hockey League’s Moose Jaw Canucks. He was given the news after his team was eliminated in semi-final playoff action.

“That’s when George (Moose Jaw Canucks general manager George Vogan) walked into the dressing room and said for us not to take our equipment off because there was an announcement to be made,” Mr. Sasakamoose told Northern Pride in a 2012 interview. “He pulled a telegram from his pocket that read, ‘Fred Sasakamoose, please report to the Chicago Blackhawks. You will be playing at Hockey Night in Canada at the Maple Leaf Gardens in Toronto this coming Saturday.’”

Mr. Sasakamoose’s life was not always filled with such uplifting moments, however. Born on Christmas Day in 1933, he was taken from his family at the age of seven and forced to attend St. Michael’s Indian Residential School many miles away in Duck Lake, SK. It was an experience that lasted close to 10 years. One positive to come from this, however, was the opportunity it provided him to skate and to develop his skills as a hockey player. Shortly after Mr. Sasakamoose returned home at the age of 15, he was recruited to join the Moose Jaw Canucks and the rest is history.

Following his 11 NHL games, Mr. Sasakamoose played with different teams throughout different minor leagues, including his brief time with the Meadow Lake Stampeders.

“I was about 17 or 18 at the time Fred joined the team,” Dubray noted. “He had come back to the area and played a year with Glaslyn before coming to Meadow Lake. I believe our team manager at the time, Frank Langlechner, recruited him. Fred was definitely a leader.”

After retiring from hockey, Mr. Sasakamoose became a band councillor of the Ahtahkakoop Cree Nation, serving for 35 years including one term as chief. He was also extensively involved in the development of sports programs for Indigenous children.

Starting in 1961, he promoted opportunities for youth in sports which included ice hockey, long-distance running, track and field, soccer, and basketball. In 2002, he was honoured by the Blackhawks at a home game, and was also inducted into the Saskatchewan Sports Hall of Fame in the builders category in 2007. Additionally, he was inducted into the Prince Albert Sports Hall of Fame, to the Meadow Lake Wall of Fame, FSIN Circle of Honour and the Canadian Native Hockey Hall of Fame. He was also a founding member of the Northern Indian Hockey League. In 2018, he became a member of the Order of Canada.

“He did a lot over the years with young people and helping them to have opportunities to play and whatnot,” Dubray added. “At the time, I also phoned to congratulate him on the Order of Canada. We had quite a good chat. He will certainly be missed.”