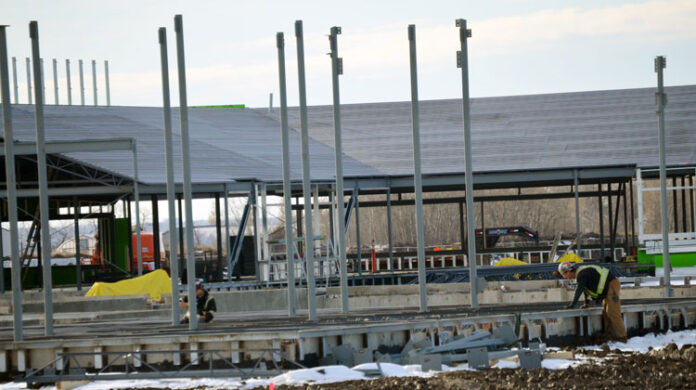 One year and counting.

Construction of Meadow Lake and area’s new long-term care facility continues just north of the city, and – according to the company hired to do the work – the project is still on track to being completed on schedule.

“All of the foundations are in and, as of right now, we have some of the cottages (residential wings) underway – I’d say they’re about 25 per cent completed,” explained John Luberda, site supervisor with the Edmonton-based Binder Construction Ltd. “We’re still looking to have the project completed by some time next November.”

According to Meadow Lake mayor Merlin Seymour, who has also been a member of the steering committee behind the development of a new Northland Pioneers Lodge since the group’s inception, the project did fall slightly behind shortly after work began in the spring. This, he added, is because of the heavy rainfall experienced at the time.

“I believe they fell just a little bit behind of their projected timeline, but are working to catch up,” Seymour said. “When we had all the rainfall in the spring, they had five or six pumps out there pumping out the water so they could continue with the ground work.”

Luberda echoed this, stating the project did “slip a little” but he went on to say it’s nothing too concerning as far as the grand scheme is concerned.

“It’s nothing we can’t make work,” he said. “The heavy rain in the springtime for sure put us behind a little bit, but we’ll catch up especially once some of the structure is closed up and we start working on the inside.”

Currently, close to 45 people are working at the site, while Seymour recently informed his peers at the Meadow Lake city council table about Binder’s plans to work round the clock to ensure the job gets done both in a timely and in an effective manner.

“There has been talk about additional shifts and additional contractors, but the project does appear to be moving along nicely,” he said. When you drive by, it’s nice to see things happening above the ground.”

Luberda said a double shift hasn’t been introduced yet, but is likely on its way.

“We will probably move to a double shift once the cottages that are currently going up are enclosed,” he said.

He also stressed how enjoyable it has been to be a part of the Meadow Lake community since work on the new long-term care facility began.

“Meadow Lake is one awesome community,” Luberda added. “We have not had one issue when it comes to dealing with local suppliers. We’ve also hired about 12 locals to help us. Yes, everything is going very well in Meadow Lake. We’re all looking forward to getting this project completed on time.”

The Saskatchewan Health Authority (SHA) awarded the tender for the new $36.6 million, 72-bed facility to Binder Construction last spring. The new building will be significantly larger than the current 55-bed Northland Pioneers Lodge. The project includes $29.3 million from the province and $7.3 million from the local community.

Also looking forward to the project is Alannah Farr, president of the Northwest Community Lodge Association, the group which continues to fundraise for the new facility’s furnishings and equipment.

“As an employee of the SHA, I can’t comment on the construction process, but, as a community member, it is exciting to drive by and see the progress happening,” Farr said.

The Government of Saskatchewan will fund 80 per cent of the capital cost of construction, with the remaining 20 per cent funded locally. Agreements are in place with the City of Meadow Lake and the Rural Municipality of Meadow Lake to cover the local share. The new facility will be built on 10 acres of land donated to the former Prairie North Health Region by Jake and Eve Danilkewich. The site is located in the RM of Meadow Lake across from the industrial area along Highway 4 North.

Farr, meanwhile, also provided an update on the house currently under construction on Gibson Crescent which the lodge association plans to sell as a means of raising even more money for its cause.

“Our house project is going great,” she said. “We have received a lot of sponsorship for this amazing project from the community and from suppliers. Working with Meadow Lake Properties on this fundraiser has been fantastic.”

“Our fundraising efforts will continue at full speed over the next year and we have many upcoming fund-raising events to stay tuned for,” Farr noted.