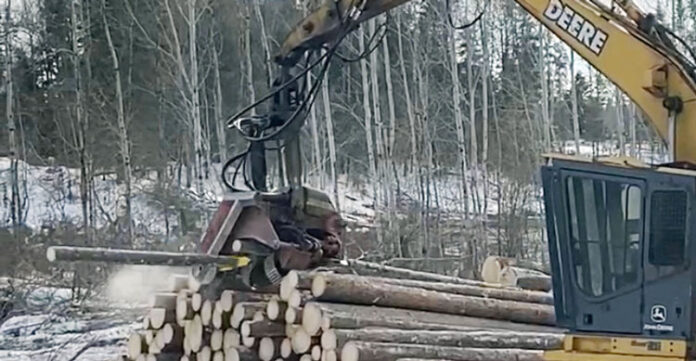 A long-awaited forest harvesting project is now underway in the Meadow Lake Provincial Park, but without the two major players originally involved.

“The original request for proposal was awarded to Tolko Industries and Carrier Forest Products, but Tolko has since signed the project over to Mistik Management, while Carrier has signed over its work to Waterhen Forestry Products,” explained Trevor Finlay, park manager. “It took them some time to get all the approvals in place for the transfer. And, while we would have liked to have seen the work start in December, we’re off and running now.”

According to Robert Follett, Mistik Management general manager, Tolko and Carrier are indeed no longer part of the project, but will receive equivalent volumes from Mistik shareholder allocations elsewhere east of Meadow Lake. He also said, in his opinion, Waterhen Forestry Products was the natural choice for the harvesting project all along.

“It just took time for all parties involved to see this was the most reasonable option,” he said.
Waterhen Forestry Products has been in business for more than 30 years, services the local mills, and is 100 per cent owned by Waterhen Lake First Nation.

This was echoed by William Hill, manager of Waterhen Forestry Products who said his company is looking forward to its involvement with the harvesting operations.

“Waterhen Lake First Nation is very involved in the park seeing as it is right next door,” Hill remarked. “We have also previously done other projects in the park like cleaning up the Murray Doell campground (following the 2019 tornado), as well as clearing some power lines. This project seems like a very good one, and we’re very happy to be involved in it, especially considering everything that happens in the park affects everyone in Waterhen because of the proximity.”

The project itself was initiated by the provincial Ministry of Parks, Culture and Sport, and is based on both the Meadow Lake Provincial Park Ecosystem-based Management Plan and Forest Conservation Management Plan. The goal is to rejuvenate the park forests which have seen a lot of areas impacted by the presence of dwarf mistletoe, mountain pine beetle and more. Harvesting will also help mitigate the risk of wildfire and enhance safety.

As noted, the work began this week in a block near Vivian Lake (between Kimball and Matheson Lakes) and will see about 180 truckloads harvested before work moves to two additional blocks in the same vicinity.

“Completing all three blocks this winter will be challenging since harvest and haul operations have to be concluded by March 31,” Follett stated. “Weather will play a factor in how long into March our operations can continue. Log hauling will begin in early March and trucks will haul east from Vivian Lake on Highway 224, then south on Highway 4 (through Dorintosh). Mistik will be posting signage on Highway 224 in advance of the log haul starting.”

Finlay, meanwhile, confirmed this year, as well any future work conducted as part of the overall five-year plan, will not interfere with camping season in the park.

“I’m excited for the project,” he said. “It will help our park forests by improving forest health and help them regenerate, and will also mitigate that fire hazard as we have seen over the years. It’s a win-win situation for the park.”

Harvested sawlogs will be going to NorSask Forest Products.

“We don’t expect any hardwood to be harvested this winter,” Follett said “Firewood will be processed and sorted for the Meadow Lake Provincial Park… Operations are expected to resume again next fall in the Vivian Lake area once the camping season has ended.”

“This plan will build upon the planning work that has been done previously and stakeholders can expect to be contacted this spring and summer regarding the continued development of those plans,” Follett concluded.