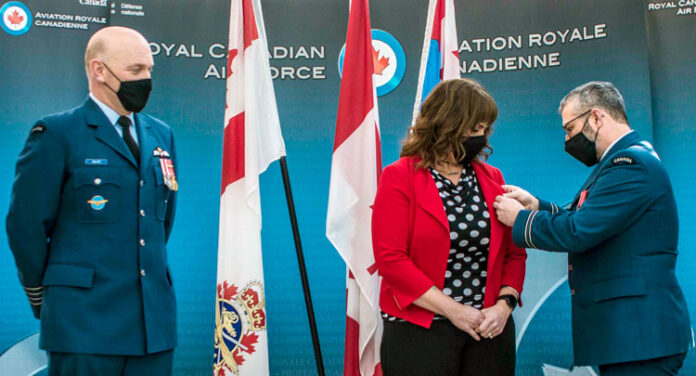 A former Meadow Lake resident recently received one of – if not – the highest honour that can be bestowed upon a civilian by the Canadian military.

Last month, Carla Forester, who now resides in Moose Jaw, was presented with the NATO Special Service Medal, which recognizes defence team members who have performed a service determined to be under exceptional circumstances. Eligibility criteria was amended in 2020 to include Canadian civilians, aligning this medal with other modern service medals which allow recognition of all members of the defence team who play a key role in the success of Canadian Forces operations.

“To receive this medal as a civilian is very rare,” Forester said.

Forester is employed with the Department of National Defence at 15 Wing in Moose Jaw. In Oct. 2018 she was deployed to Latvia for three months as part of Op Reassurance Rotation 10. Op Reassurance is the Canadian Forces’ contribution to NATO’s assurance and deterrence measures in Central and Eastern Europe. These measures aim to reinforce NATO’s collective defence and show the strength of allied solidarity. Forester represented Canada as a DND civilian in the position of task force senior safety officer. Her role was to assist the battle group, as well as the national supporting elements of 10 nations to improve their safety programs and procedures.

“They announced there were positions available for civilian senior safety officers to go to Latvia, and I put my name forward,” Forester explained. “Soon after, Canadian Joint Operations called and asked me if I wanted to go, and I said ‘sure’. It was such a unique opportunity – civilians don’t often get the chance to be deployed with the military, and this was an amazing opportunity to experience operations in terms of what the Canadian military is capable of. I got to go to a different country to support the Canadian contingent, but there were also people there from Albania, Spain, Italy – again it was just an amazing opportunity.”

Being deployed, Forester added, only cemented what she already knew as a Canadian – just how amazing freedom is.

“For the entire deployment I was living in Riga, Latvia and would spend 60 per cent of my time on base there with the troops and the rest with in HQ in Riga,” she noted. “If I had grown up in Latvia, however, I would know what communism is. There’s only one generation living there right now, in their 20s, who know what it’s like to be ‘free’ in our sense of the word. On my time off, I would visit museums and learn about how they struggled to get out from under communism… I exposed myself to all that, and I am so grateful to be Canadian.”

Forester has been working for the Department of National Defence for close to 15 years. She grew up in Meadow Lake, graduated from Carpenter High School, but left the community at age 21.

“My family lived in Meadow Lake for close to 40 years, but my mom (Cathy Forester) moved to Moose Jaw four years ago,” Forester said. “She spent 33 years teaching in Meadow Lake.”

Forester has an 18-year-old stepson, as well as a daughter who was four at the time of her deployment.

“My husband encouraged me to go (to Latvia) when the opportunity presented itself,” she said. “Very few spouses are that supportive. I am very lucky.”

In addition to the Special Service Medal, Forester also received a commendation from the task force commander when her deployment came to an end. Forester also said she would jump at the opportunity to take part in a similar deployment if she can.