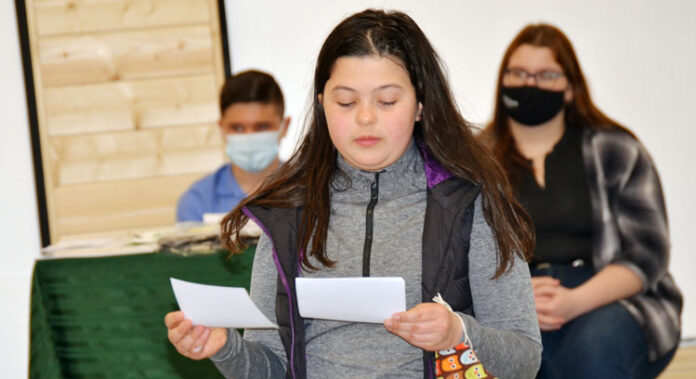 The role and responsibilities of 4-H members is much more than just talk, but that wasn’t the case this past weekend.

“Public speaking is one of the requirements of members to complete their 4-H year,” explained Bev Tallmadge of the Meadow Lake 4-H Beef Club. “Whether they do the public speaking at a competition, or – as a few of the kids do – after the fact for various reasons, it’s an important aspect of 4-H as a whole.”

The district competition was broken down into four age categories – Cloverbuds (six to eight years), Juniors (nine to 12), Intermediates (13-15) and Seniors (16-21).

“Twenty-two speakers is about average for our district,” Tallmadge continued. “We had six virtual speakers and 16 who competed in-person.”

Tallmadge went on to say the provincial 4-H body only granted permission for in-person competitions Feb. 22.

“We chose to rotate families in – one family came in, the member did his or her speech, the family left and the next family came in,” she said. “Studio Three was the location of choice and it seemed to work really well, as it was a nice layout.”

The district competition rotates each year between the various clubs in the district. Meanwhile, Tallmadge said she was very impressed with every speech given that day.

“Those kids are always prepared,” she said. “The speeches they come up with are just amazing… they’re always entertaining and informative to listen to.”

This was echoed by District 36 4-H president James Jensen.

“Good luck to all who are competing at regionals,” Tallmadge added. “I should also acknowledge the technical support we received from Kalynne Martin, the North West Regional 4-H specialist who helped us to get up and going with our virtual speakers so we could get our event started.”

Among those excited about the regional competition is 4-H member Braedon Greschner who competed at districts in a virtual capacity.

“I was a little nervous standing in front of a camera,” he said. “It was kind of scary… I wanted to do my best, and had to make sure my sisters stayed quiet in the background. I feel good about how I did at districts. I know there are a lot of other good speakers out there, so I will just do my best and see what happens.”

Meanwhile, 4-H members have much on their plate in the months ahead as they prepare for their upcoming weigh day and start planning for the annual Achievement Day as well as the District 36 Show and Sale.

“We can always hope we can have it like the good old days,” Tallmadge said. “In the meantime, we will be making sure the members are keeping current with their projects’ record books, which is another requirement of completing their 4-H year.”